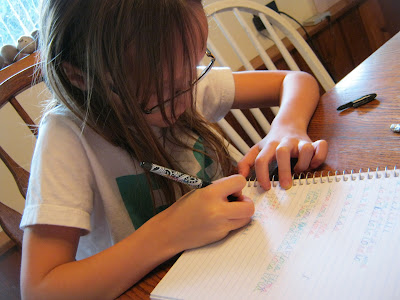 I’ve gotten used to “graphomotor delays” in my kids. Erin was 8 when she first managed more than a kindergarten-style scrawl. She had been reading proper novels for four years and was playing the Bach Double on the violin but still printed in mostly upper-case tilted, squashed letters. I remember Noah agonizing for an hour over signing his name on his passport application at age 11. Even Sophie, who was considerably less asynchronous, has only developed a legible cursive script in the past couple of years.

It hasn’t mattered much. We don’t need to use written work as a form of evaluation of the kids’ learning. It is always clear, from their enthusiasm, their questions, their conversation, their observations and their honest self-assessment, what they have learned. For the most part it’s been fine to wait. Erin now writes easily and well. Noah can write neatly but his dysgraphic tendencies make it a heck of a lot of hard work for him, so he much prefers to type. Sophie does fine and while writing is still a bit slower for her than it would be for most 12-year-olds, I’m sure that whenever she starts doing lots of writing her speed and fluidity will quickly catch up.

Then there’s Fiona, the surprise at the end. She hasn’t inherited her siblings’ lags in the realm of written text.  She hasn’t done much printing compared to schoolchildren her age, but what little she does is neat and easy for her. And so last evening when she said “I want to learn to write my name in cursive” I figured why not? The Portland (Getty-Dubay) Italic font we’ve tended to use around her makes for a pretty quick transition from printed to cursive. 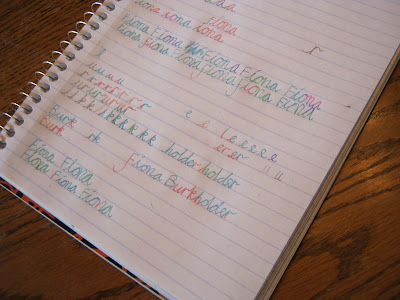 It took about 30 minutes of practice for her to learn the “joins” necessary to write her name in cursive. Not bad, I think! Now that she can do it neatly, she plans to work on a messy version, so that she has an artistic grown-up looking signature.

She’s using a nifty notebook and pen set we found a few weeks ago. The paper is treated with invisible dyes which are revealed by the oxidizing ink in the pen. Naturally this led to all sorts of experiments to figure out the patterns and the processes of the chemicals. And it has also led to more interest in handwriting.

Cursive in a day

6 thoughts on “Cursive in a day”