We’re part of a new program at the local school, a Distributed Learning (i.e. government-funded home-based education) program. It’s a bunch of well-meaning people within the school system trying to figure out not only the government regulations and expectations but also what homeschooling is actually like. 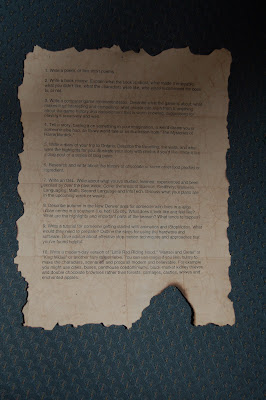 So far it feels considerably more intrusive than the SelfDesign program we left. But for us this year the intrusiveness is tolerable. Why? Because Fiona loves sharing her learning with a “teacher,” and is proud and excited to provide evidence of learning to an interested adult outside the family. And because Noah and Sophie are both looking for more accountability and structure than we’ve been able to consistently create at home. Even if they don’t relish every bit of work, they’re interested in accomplishing some course-like work and projects in math, science, infotech and digital media.

But then there’s the other stuff. Like history. And of course writing. Our liaison teacher has not been pressuring us to provide evidence of Noah’s and Sophie’s writing ability, but it’s clear that his job, which he’s muddling through for the first time ever, would be made considerably easier if they would produce even just a couple of little scraps of written work.

So last week I explained to the middle two kids that reporting would be easier, both for him and for me, if they could write something this term. And I put together a list of writing prompts of various sorts and asked if they would pick a couple and create something. Then I went away for the weekend.

Sophie’s creative side rose to the challenge, but not exactly in the way I had intended. She took the page of writing prompts and scrumpled it up in a ball. I don’t think she did this in anger or frustration — perhaps just to be silly, just to prove that she didn’t need to respect this “assignment” and that if she did it she would do it by choice? For whatever reason she wadded it up to wrinkle it, flattened it out, put it through the laser printer as a blank page to “iron” it out, folded it repeatedly, soaked it in black tea and dried it, then put it through the laser-printer iron again and finished up by tearing and burning the edges. Beautiful, isn’t it? Can we count that a history project?

(She did eventually write a lovely poem and a short research report which I duly submitted as Evidence of Learning. But I think the assignment page treatment was even more creative.)

4 thoughts on “Creativity and writing”