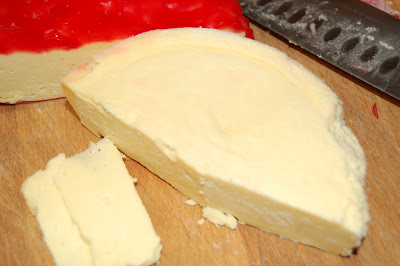 Finally the Day of the Unwaxing of the Cheese arrived. Sophie suggested that her birthday would be an auspicious occasion, marking about three months of aging. We missed her birthday. I had spent the weekend driving Erin first west for a rehearsal and then all the way east to Calgary for a lesson and arrived home at 10 pm after 21 hours of driving over the previous couple of days. We had decided to hold the natal celebration a day late.

And so The Unwaxing proceeded. The cheese was a lovely texture: just slightly on the dry side for farmer’s cheese, but holding together nicely in slender slices. I would have liked it a little sweeter, but it had a nice aged bite to it and goes very nicely with crackers.

The cheese, at last

2 thoughts on “The cheese, at last”