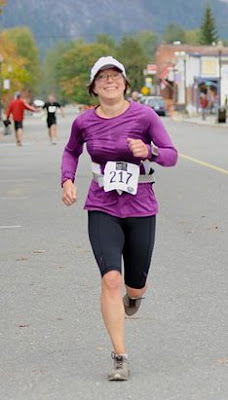 I developed a bad case of SufferFoot after SufferFest. I had been so enamoured of my new minimalist shoes that I chose to wear them for the race without noticing that I’d only run a total of 33 km in them prior to that, none of that on trails. Even before the race I’d had a tiny bit of heel pain in my right foot. During the race it got much worse, and for a few days afterwards I could barely walk. It was the dreaded plantar fasciitis. I’d never had it before, but it’s a very common injury for runners and non-runners alike. Barefooters tend to have much less trouble with it, but minimalist shoes are still shoes, and I had just run a nasty long run in shoes.

For once I think I behaved sensibly. I laid off running entirely for a week. I iced my foot. I taped it. I exercised the little muscles and stretched my foot and calf. I didn’t walk any more than I had to. I used highly cushioned shoes while the pain was bad. I took anti-inflammatories semi-regularly for a few days, something I almost never do. It took about a week before I could weight-bear reasonably comfortably.

During week 2 I started walking again, and did some slow jogging for no more than 10 minutes at a time. It was really hard to limit myself, but I did it. Things started to improve much faster that week. 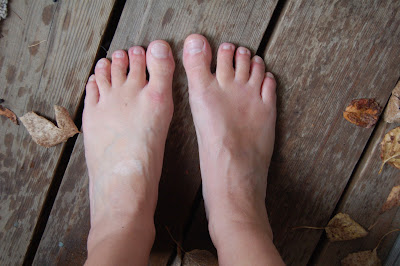 During week 3 I increased my mileage from 1.5 to 3 to 5 kilometres at a time, still running really slowly. I had wised up, dispensed with my minimalist shoes and settled back to running barefoot or in Vibram FiveFingers. I discovered that things started improving much more quickly when I wore less on my feet. I was a little worried about this approach, which followed barefooters’ wisdom but flew in the face of conventional wisdom. My foot still hurt a bit at times, and it felt vulnerable; I wondered if the uncushioned impact on my heel might make things worse. But instead the fact that I had to actively engage the small muscles of my foot functioned as a kind of active physiotherapy for my still inflamed fascia. Subjecting my stiff and sore foot to that little bit of stress was actually making it better! By the end of the week I was able to do jumping jacks and rope-skipping barefoot without any pain.

So today I ran 8 kilometres at a decent pace on a fairly flat but rocky and rooty trail in my VFFs. My feet feel great, better than ever. Not a single twinge from my heel. Yay!

So what’s the lesson here for an aspiring minimalist runner?  It’s to be careful of using minimalist shoes as a stepping stone to true barefoot running. They provide protection from rocks and such, true, but that protection can encourage you to run a lot farther without support than your still-weak-and-atrophied feet can handle. I should not have run that kind of 25k run in non-supportive shoes. Not at this stage. In another year, yes, probably. But not yet.

And the ultimate answer isn’t to fall back on high-support shoes: it’s to continue gradually strengthening the feet through shorter as-minimalist-as-possible runs. If I do a particularly long, fast or difficult run that exceed what my still weak feet can handle, I’ll put them in supportive shoes for that, then kick them off for the next run to get back into the foot-strengthening regime.

Now that I seem to be through this little set-back, I’m looking ahead again. My current plan is to take my mileage back up to my typical 30-40k a week, and then as the weather gets cold and nasty and the days get shorter to see if I can continue to increase my mileage considerably higher. If I’m doing well with that by mid-December I think I’ll register for a spring marathon and start training. You can follow my weekly mileage in the widget at the right side of my blog. If I hit 60 km/week (37 miles: alas the widget only does miles) by mid-December, I’ll sign up for a spring marathon. If it turns out to be impossible to fit that kind of mileage into my week through the winter, so be it. I’ll put it off until the fall.