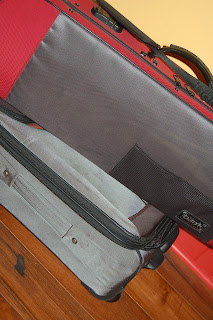 We seem to be traveling more than ever lately, and in so many different directions.

Erin was off to Banff last week for WordFest, a writers’ festival that the school’s writing classes attends each year. She’s an old hand at the trip: this is her third year. She enjoys it, both socially and educationally. This year an assistant teacher who had just met her on the trip expressed incredulity that Erin had ever been shy. Uh, yeah … in fact she’s still shy, but she can definitely come across totally differently in the right environment, the writers’ festival trip being the right environment. She had fun.

Since that trip put Erin 85% of the way to Calgary, we opted to drive out and meet her at the end of WordFest and drive her on to the east to the big city for a violin lesson, with Noah getting a viola lesson on the same trip. This entailed staying at a new, interesting hotel in Banff, so the younger two decided to come along as well. We drove out on Saturday afternoon arriving mid-evening, left for Calgary at 8 Sunday morning, fit in the two lessons, then turned around and drove the whole distance home, arriving mid-evening. Doing this with the two eldest in a day and a half is one thing. I figured that with all four it would kill me. But actually it wasn’t so bad. The kids travel so well now. They nap a lot. They don’t whine. They are accommodating with their bathroom and food needs. When they’re awake, they are enjoyable. They invented a game called “Rock, Paper, Random.” It’s a word game that’s sort of a cross between Rock, Paper, Scissors and Apples to Apples. You and your opponent yell out in tandem “Rock, paper, ___!” inserting some random noun at the end, and then you table arguments as to why your random word wins over the other person’s. The most convincing, or elegant, or witty argument wins the round. For instance Noah’s “door” won over Sophie’s “tooth” once he reminded us that you can tie a loose tooth to a doorknob and yank it out.

Yesterday Fiona went off to Nakusp for a skating outing at the arena there with a couple of friends. Today Noah, Erin and I head 90 minutes south to Nelson for youth choir and a meeting about the 2012 trip to Cuba.

And then tomorrow at 6 a.m. Erin leaves with a couple of friends to Montreal. Last summer Gwen Hoebig recommended the McGill performance program to Erin and suggested that if she could find a way to get lessons with particular members of the violin faculty this would be helpful to her future prospects. So when we found out our friends were heading off to visit another (mutual) friend who is currently a student at McGill, we asked if Erin could come along. She has lessons scheduled with three of the top violin faculty. The lessons are well-timed: with her recitals coming up she can certainly benefit from getting different perspectives on her performance repertoire, and also from the opportunity to just play for lots of different people. And getting herself known to these teachers is definitely a good thing. She’ll be back after the weekend, in time to make it to her weekly gig as accompanist for the community choir. And then in the next three and a bit weeks she’ll have two or three trips to Kelowna for rehearsals and recital, and one or two trips to Calgary for lessons. Yikes.

The day after tomorrow Chuck, Sophie and Fiona will be heading to SW Ontario for an extended-family get-together. Chuck’s mom’s 90th birthday is coming up, and there are new great-grandbabies in the family to meet. Chuck is the youngest of his mom’s eight children, and Fiona is the youngest of her 20 grandchildren. There will be many more great-grandchildren in the future. Sophie and Fiona have already been recruited as part of the church-basement-decorating committee, and will be playing their violins as part of the musical entertainment. They’ll be gone for just four days, two of them spent in travel. Not relaxing, but they’re definitely looking forward to it. Fiona hardly remembers meeting most of the extended family ever. She knows some of them via Facebook, but is very excited to meet them in real life.

And Noah and I: we’re staying home for six days straight. Yay!