I surrendered to the world of Facebook about a year and a half ago. Mostly to keep track of what my elder kids were up to. I like it okay; some parts are great, some not so great. I do enjoy the little peeks into my kids’ thoughts and their writings.

The whole family is on Facebook now. Sophie is planning to take a high school course soon, so she qualifies on a technicality. Fiona is really younger than Facebook members are supposed to be. But she loves being a part of whatever the rest of the family is, and I know that the “rules” on Facebook are about preventing lawsuits from parents rather than any real need to protect children from content. I like that by friending my kids I know that they are learning and abiding by rules concerning netiquette and internet safety. We are old hands at the internet, and I have no worries, but it’s reassuring to see them behaving respectfully and expecting the same of their friends.

Fiona first joined a year or so ago. Eventually her account was terminated, presumably because she seemed younger than allowed. The other day I gave her a new e-mail address and got her set up again. She’s been having a great time messaging her dad and keeping in touch with people from near and far, especially ones she met over the summer at SVI. Some of her old friends posted how glad they were to see her back on Facebook, and some asked why she’d been gone. I particularly liked this exchange with an older friend from aikido: 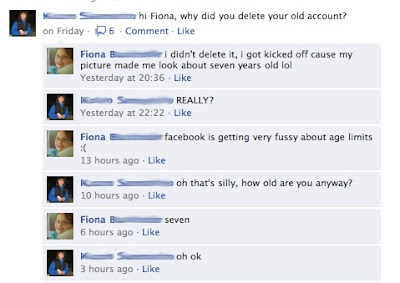