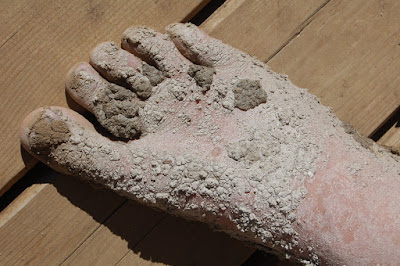 Mixing cob is messy work. It’s most easily done on a tarp, and traditionally done with your feet. I remember reading about this practice in a book of historical fiction a decade ago, never dreaming I’d be doing it myself.

We mixed up one small batch of sand/clay cob, set it aside, and then got busy building the form for the dome out of sand. Somebody isn’t very good at three-dimensional estimates. I could have sworn that a garbage can full of screened sand would be plenty. It was far taller and almost, or so it seemed, the same diameter. But the extra 15 to 20 cm in the oven’s diameter translated into a lot of extra volume! We had to madly screen a couple of extra wheelbarrows full of sand to complete the dome. 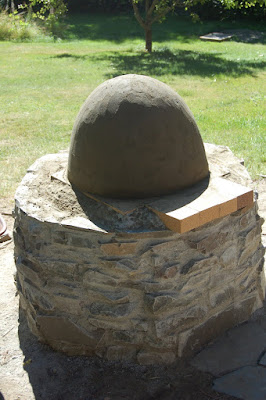 Doesn’t it look lovely, though? So smooth and symmetrical and uniform. I almost wanted to leave it at this stage for a few days to admire it, but time was of the essence. Before the sand began to dry out we needed to proceed to the next stage.

We’re mostly working right from the “Earth Ovens” book, but one tweak the woman who led the cob oven workshop suggested was applying wet newspaper between the sand form and the inner wall layer. This helps keep the sand from drying out, provides a surface that can be accidentally brushed with hands or fingers without crumbling, and facilitates shelling out the sand once the wall of the oven is in place. Although it was a little fussy getting the newspaper to stick (we applied some clay slip over top of it to hold it together a bit better), this step was well worth it. It definitely helped make the next stage less fussy.

The real work of the afternoon was in applying the thermal layer. This isn’t true cob, which has organic matter like straw or manure mixed in, but a simple sand-clay mix. It will be right against the fire once the oven is in use, so any organic matter would combust. The thermal layer is applied in a layer 3″ thick. It needs to be even in its thickness, and it has to be applied carefully so that the integrity of the sand form isn’t compromised. 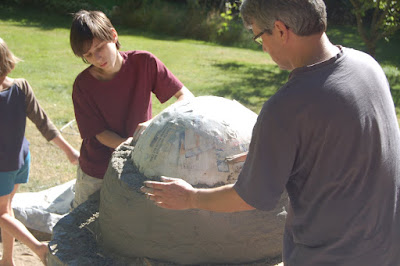 You have to prod and poke to bond each level to the previous one. And you can’t push inwards against the sand. The mix is quite stodgy, so it’s not easy to work with.

Fiona sat on the tarp making muck-balls about 3″ in diameter. Sophie transported the muck-balls to the oven. And Chuck, Noah and I applied the balls to the growing thermal layer of the inner wall of the oven. 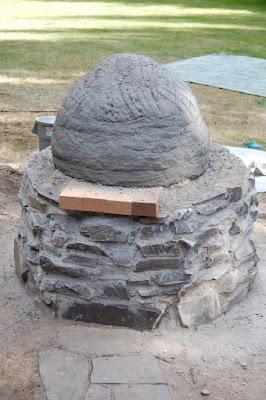 It doesn’t look quite so beautiful now. We roughed it up to give the next layer a bit more to grab onto. And it will get even more ugly as we apply the next couple of straw-laden cob insulating layers. But it has a certain monolithic presence already, with a fair bit of symmetry. We’re pleased with how it’s turning out. If it has set up nicely by tomorrow we’ll cut out a door and scoop some of the sand out. Or we may wait a couple of days.

Right now it’s drying and hardening and we, showered and changed out of our muck-covered clothes, are going out for supper.

One thought on “The dome”