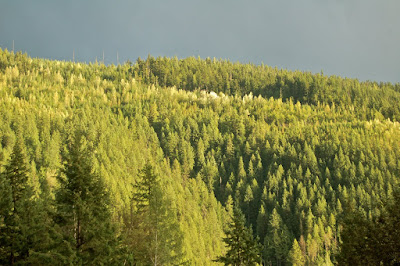 It started for me at around 6 a.m., in the back of the van. Erin and I had driven her to Calgary for an extra lesson. All her maniacal practicing has left her sorely in need of some instruction, so we squeezed a trip to Calgary in during her three days off work. We decided that since it was summer, and there were just the two of us, we should save motel money and just sleep in the spacious back of the van. It worked really well. Neither of us being six feet tall, we were able to stretch out quite comfortably after stowing the third-row seats and flipping the middle-row seats out of the way. With Thermarests, pillows and sleeping bags, we were quite comfortable. We know the highways to Calgary well and were pretty sure we’d be able to find good (free) places to “camp” in the van.

As it turned out we had great luck finding places. I followed a hunch, turned off the highway, and almost immediately stumbled upon something just right. The first night we ended up right alongside the Kicking Horse River. Beautiful, and with a washroom with plumbing nearby and trains rocking and squeaking by in the night. We were utterly alone and it was a fabulous spot. Last night we were at Halfway Creek, close to home but a welcome spot for two people just about nodding off in transit. Someone else had snagged the spot right on the creek but we had a private mossy treed area and the sounds of the creek. So that’s where we awoke this morning.

We climbed into the front seats and drove the rest of the way home this morning. Unpacked the van. Filed away the half-dozen novels I’d bought at Chapters in Calgary. Put the leftover food in the fridge.

I went for a tempo run. I’m in Week 8 of a 10-week running schedule prior to the Rocky Mountain Half Marathon. I wore my Vibram Five Fingers KSOs, which I haven’t in a while since I’ve been taking every suitable opportunity to run barefoot, using my Nikes for the really wild and wooly stuff. But this was supposed to be a hard fast run and I needed to do it on a trail since the sun was beating down on the roads. I knew I couldn’t run anywhere near fast enough barefoot, but the trail wasn’t too knarly so I donned the KSOs. Ended up with the beginnings of a blister on my big toe, but that won’t be a problem since I likely won’t need to run in the KSOs for a while. The trail had a gradual rise and fall to it, and it was hot, and I’ve been off caffeine for a week, so I wasn’t quite as fast as I’d hoped … but I managed over 6.5 km in 35 minutes which isn’t bad for me under those conditions. I’m being very careful not to push myself too hard: it was August last year, in the hope of running a fall Half Marathon, that I injured my hip. I don’t want any repeats of that!

After my run I came home, showered, and then we put a picnic dinner in the van and all drove up to Summit Lake where we were meeting a photographer/friend for a family photo shoot. We hadn’t got anyone to take pix of us as a family since well before Fiona was born. We arrived. The weather looked threatening, so we decided to get some photos before digging into the food. The photographer pointed us to a bench/dock thing at the side of the lake, and suggested we sit down in a row on it. As we were just moving over about to do so, there was a crack and she yelled “Oh God!” and a pretty large rotten birch tree fell down right on the dock where we’d been about to sit.

We laughed pretty hard about that after we got over the shock. Wondered cynically what it would have been like if we’d been a minute earlier and had managed to immortalize our family of 6 in a photo seconds before we’d become a family of 5, or 4.

So we managed a bunch of photos without any fatalities. And then it poured rain, and thundered plenty, and we drank wine and ate dinner under a gazebo. We wandered around and picked up a few of the hundreds of tiny toads roaming the shores of the lake and watched them climb and jump. Each one is about a centimetre long. And then we came home as the skies cleared. Saw a lovely rainbow. 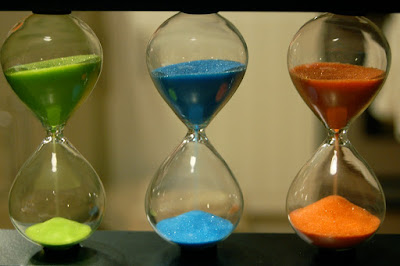 While Fiona and I were practicing with our new hourglasses (10 minutes, 5 minutes and 3 minutes respectively, assigned to different violin tasks here and there as appropriate), we looked out the window and noticed the sky. It had got seriously dark again. The last sunlight was streaking across onto the northeastern slopes of the mountains, but the clouds were dark and ominous. Such brightness in front of all that mounting nasty weather. The photo above doesn’t do it justice.

A few minutes later it began to hail. Sophie and Fiona headed outside with a sieve to catch some, and the dog skulked inside.

Now it’s dark. The nasty weather has abated. Surprisingly the power hasn’t gone out. We’ve watched our BSG episodes and it’s time to start one of our new novels as a bedtime story.