The stars aligned, and I had a really good race. In my last post I said “I would be happy, now four years older and well on the far side of 50, if I could better my 4:24 time from 2012. I think that’s definitely possible, and if all goes well I could cut quite a bit off.” I would have been disappointed if I hadn’t knocked ten minutes off. So 4:14 was my primary goal.

My secret goal was sub-4:00, partly because it’s a round number just begging to be cracked, but partly because for my gender and age-group, it’s the Boston Marathon Qualifying Standard (BQ). When I slotted myself into the Hansons Marathon Method, I picked the training paces that targeted a 4:00 marathon. I completed all the training according to plan, so if the Hanson brothers were right, I knew I had what I needed to beat four hours. If things went well on the day.

And they did. I’d been sick with a sinus cold for almost a week beforehand but I woke up Sunday feeling better. The weather was forecast hot but the breeze off the ocean kept the heat from being too much. I hydrated adequately but not too much; I didn’t have to use the porta-potties along the way. I wore the right clothes. My new shoes didn’t give me blisters. The double-salted licorice Fiona had given me for my birthday replaced the salt that began caking my cheekbones and shoulders as I sweated.

So I ended up with a net time of 3:51:13, cutting 33 minutes off my previous time, and qualifying handily for Boston. When people started asking me if I would be going to Boston, I said no, having never even considered it. I had really just wanted the accomplishment of knowing I had reached that standard. 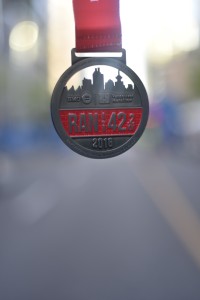 But then I remembered that Erin had qualified for Boston on violin and would therefore be living there, potentially saving me a $400/night hotel room. And Fiona and I had already been talking about how we really wanted to go and visit her in order to see the city. So … maybe…

One thought on “BQ”