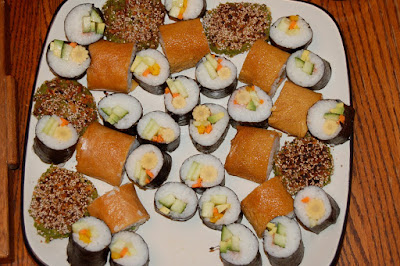 During the summers we don’t get to a grocery store very often. The last time I did a true grocery shopping was a week and a half before SVI started … almost four weeks ago. We have been eking things out by shopping at the sparse Friday Market, making occasional convenience store purchases, and raiding our basement pantry for staples. Creativity has been called for.

Whisk together thoroughly. In a cool large oiled skillet pour the mixture in and use a spatula or spoon to encourage the puddle to assume a rectangular shape in the same proportions of a piece of sushi nori. Now increase the heat beneath the skillet to cook the mixture until firm. Remove from heat, allow to cool. The rectangle can now be treated (gently!) like a piece of nori and used to roll up rice and fillings, then sliced into 6 pieces.

Alternatively, tomagoyaki can be folded or rolled up upon itself with no fillings and served as a snack food. We were into bento-style lunches for a while and cold tomagoyaki is a good protein-laden lunch box finger food.

Add a bit of water to the frozen peas and bring to a boil in a saucepan. Simmer 5 minutes. Drain.

In a food processor add the cooked peas to the next five ingredients. Purée.

Combine onion and garlic flakes with chia seeds and salt on a small plate. Place a generous tablespoon of pea mixture on top of the coating mixture. Flatten slightly with a fork and flip to coat the other side in seasonings as well. Fry in a small drizzle of oil on both sides until golden brown. Lovely hot or cold. Great in lunches too. Makes a dozen.

Both of these recipes were inspired by similar ones at justbento.com.