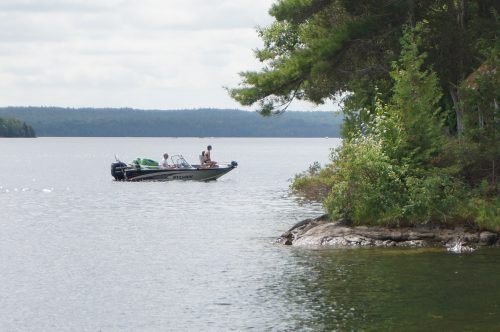 We rented an island. We were looking for a cottage that slept at least 14 comfortably, somewhere within half a day’s drive of both Toronto and Ottawa. And the island was what we found.

Actually, my mom rented it, as a gift to all of us. I had hoped “all of us” would include not only my mom, my sister, my brother-from-England and his family, my brother-from-Ottawa and his family but also Chuck and all of my kids. But we ended up with a few people missing including Noah, Sophie and Erin who all had school or work responsibilities for the summer that conflicted. 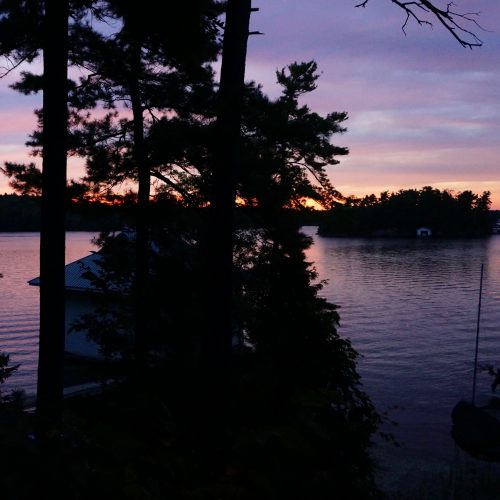 The cottage consisted of a beautiful main house with five upstairs bedrooms and a couple of other cabins. My brother Jon brought his power boat, so he taxiied us back and forth from the marina efficiently, and also helped keep the kids occupied with fishing and tubing excursions.

We spent a week there. The cousins (aged ~11, 13, 14, 15 and 17) got along beautifully. Various other visitors came and went over the week, including the almost-family foreign student we hosted for five years when I was growing up, my uncle and aunt, some of my niece’s friends. It was a nice mix of closer and more extended family and friends. 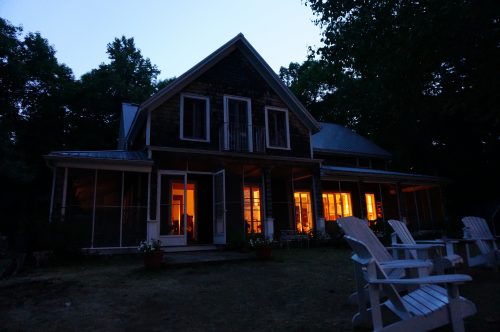 There was a 1.5 km trail around the island that seemed to be crying out for some maintenance. Not having my favourite tools (mattock and McLeod rake) I couldn’t really do it justice but I managed to rake over the whole length, removing as many rocks and as much vegetation as I could with a regular garden rake. 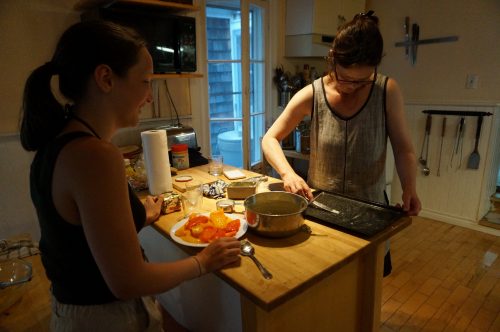 There was lots of food, of course, and Fiona and her Aunt Emma hit it off in the kitchen, churning out quiches, biscuits and langues de chat. We traded off for meal preparation, managing to keep the more vegetarian types happy while also allowing their carnivorous children free rein.

One day we made a trip to Smiths Falls to visit the railway museum housing the restored dental car that my grandparents worked on as staff dentist and dental assistant in Northern Ontario around 1960. I have a story my uncle, then in university, wrote about visiting them on the train over Christmas which I should dig out and post here.

We played lots of board games and cards, swam in the lake (so warm!), canoed and kayaked and just hung out. The olympics were on, so we would occasionally huddle around an iPhone screen and watch a sprint heat or other bit of video. It was a pretty lazy week, which was how we wanted it. It was a chance to get to know each others’ kids anew, as they were much younger the last time we were together in 2011. 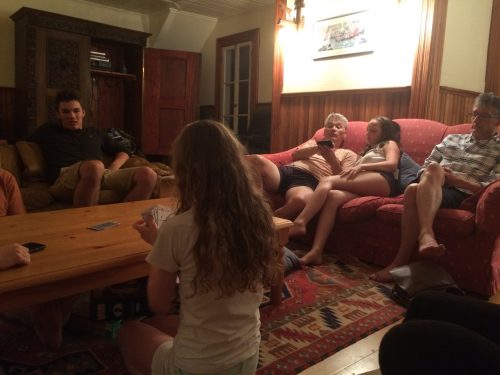 There were big thunderstorms, downpours, crazy-hot sunny days, misty calm, wind chopping up the lake, and a power outage to round out the week. A bit of everything. Which was perfect.

On the way back to BC we were able to intersect with much of the Burkholder clan for a half-day visit at Chuck’s sister’s place. We had a fabulous time there as well. His family is much bigger (he is the youngest of 8, the next generation contains 20 and the generation after that is already almost that big) so even though we were missing a lot of them, it was still a full-to-bursting gathering.

We arrived home without incident feeling like we’d had an actual holiday, just in time to begin the headlong rush into the start of the school year.