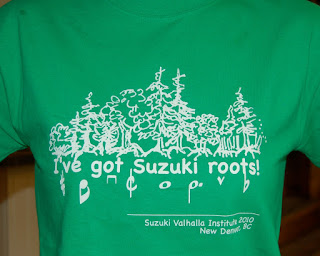 The Advanced Chamber Music (ACM) program which prefaces this year’s Suzuki Valhalla Institute has begun. It’s a weekend of intensive quartet, octet and chamber orchestra rehearsals for twelve advanced  students, including Erin, Noah and Sophie. These are kids who easily participate in non-Suzuki events and ensembles as well. Often their Suzuki-ness is incognito in these situations, as they read and play Beethoven and Mendelssohn just as any traditionally trained student would. We thought it would be nice for them (and for all our future advanced students and their parents) to have t-shirts that would not simply indicate that they attended the SVI summer camp, but spoke to their musical roots in the Suzuki method. There are certain bastions of traditional music education in Western Canada where it is thought that “Suzuki is okay for little kids, but you should move on to something else pretty soon.” And yet, unbeknownst to them, these same teachers are coaching (and raving about!) advanced Suzuki students in ensembles and master classes without knowing that they are Suzuki students.

So above is the 2010 SVI t-shirt. I love it! My friend did the artwork. My kids helped choose the colours. So far reaction has been very positive. 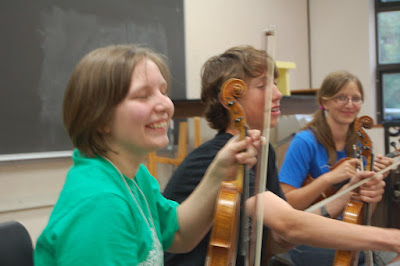 Last night the ACM program began with a tutti rehearsal of Bach’s Brandenburg Concerto No. 3. Fantastic rehearsal, fantastic group of kids. None of them seem to be in over their heads, the overall match in abilities being good, and they seem to be enjoying themselves. Which is lucky, because they’ll be working pretty hard, and spending a lot of time together, especially over the next 36 hours. They perform the Brandenburg tomorrow. Quartet and octet rehearsals will continue throughout next week, as these dozen students are joined by more than seventy more for the main SVI.