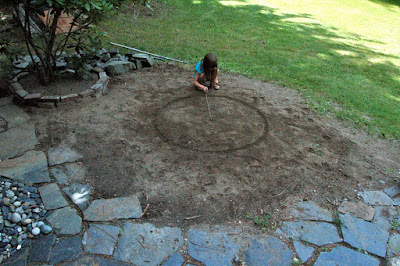 Since we finished our deck, the space directly in front of it has been dominated by The Lump of Dirt that was excavated back from the house. I never purposely photographed The Lump. It did show up beneath Fiona in one of my dorodango posts, but mostly I cropped and used oblique camera angles to avoid memorializing it in photos. It certainly wasn’t lending a picturesque appearance to our lovely new deck or enhancing the view from the front of the house.

Over the last couple of weeks, we have finally moved The Lump and distributed it in various places in need of soil. We shovelled it into the tractor bucket and moved it across the property. And this is what we were left with. A lovely oasis of flat ground nestled in the concavity of the deck, bordered by some flagstones, a mere 4 metres from the front kitchen door. Crying out for an earth oven.

This morning we graded and tamped and sketched out our 1.25-metre circle. And we scavenged the first load of rocks from a roadside pile a mile up the highway beyond our place. You can see those to Fiona’s left, tucked behind the rhododendron. It remains to procure some more rocks, some drain rock to fill the foundation as we build, some mortar to glue the rocks together, and then we’ll be setting to work building our oven.