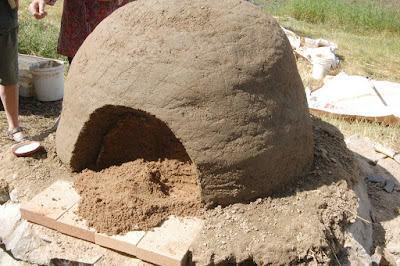 I spent some time this weekend learning how to build an earth oven. When we wrecked our old deck and built a new one in a slightly different orientation, we ended up with a vacant sunny spot 4 metres from the kitchen door that was just crying out for an outdoor oven. When I heard about a workshop to learn to build an earth oven, I signed up right away.

The earth oven begins with a foundation with a layer of fire bricks, upon which a dome of damp sand is constructed. This is the form upon which the oven is built. For this oven we built a dome 27″ in diameter, which with 10″ walls will end up being about 4 feet in diameter once completed. Shown in the first photo is the thermal layer (which is made from a 2:1 mixture of sand to clay, with just enough water) which has been applied over the sand form to a thickness of 3″. This is the most exacting stage of the construction. The sand, covered in a couple of layers of wet newspaper, isn’t exactly very strong. The sand/clay mix had to be applied with just the right amount and direction of pressure to get it to bond to itself but not put undue stress on the sand. The door was then cut away and everything left to set up a little overnight. 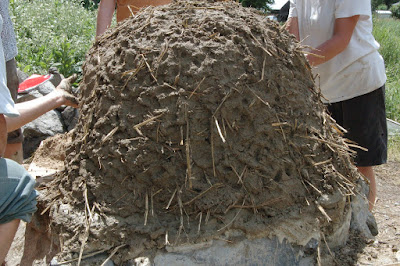 The next day we pulled some of the sand out to help speed up drying the oven and began adding the first of two insulating layers of cob. Cob is a mixture of sand, clay, straw and water. The straw adds tensile strength and also helps insulate the interior of the oven. We mixed ours on tarps with our feet.

Applying the cob was much less exacting than working the sand/clay mix onto the sand form the day before. We wetted down the outside of the thermal layer and applied clay “slip” (a clay-water mix) to help the cob adhere, and then we stuck it on and pressed it in. We tried for about 3″ of thickness, and intentionally made the surface very lumpy, since there will be a whole other layer to go on in a day or two once this layer has partly dried.

The cob layer can be used to add sculptural qualities to the oven. I’ve seen illustrations of ovens that are in the shape of snails or phoenixes or dragons. This oven is to be a basic dome shape. Ultimately the main cob layer will be a total of about 6″ thick. 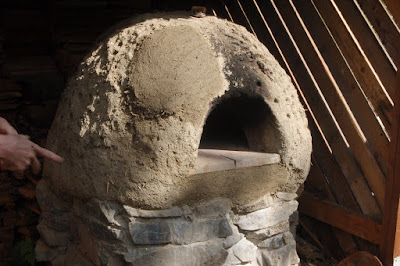 Once the main cob layer has reached a 6″ thickness and the whole oven has had a few weeks to dry thoroughly, a final smooth “plaster” layer of finer cob is applied. This cob is made with chopped straw or manure instead of the longer strands, so it is much smoother and easier to slather on artistically. We were able to practice a bit of this on another oven at a later stage of construction. The final plaster layer of cob can be smoothed on with a wooden trowel and as you can see at the top left of the photo it gives a nice smooth finished appearance to the oven. This layer can be made from coloured potters clay and washed sand if a different colour is desired. It can also be inlaid with ceramic tile. Because we don’t live in the desert, earth ovens here need to be protected from the elements to some extent to last more than a few years. This one is tucked just inside a lean-to shed with its own supply of firewood.

Cob ovens like this are fired for an hour or two before baking. The door is left open during firing, as there is no chimney. There’s a bit of smoke at the beginning of this burn. The oven above has been used weekly for the better part of a year, and you can see that there’s a bit of soot that has collected above the door, but not much. Once the fire has burned down to just a few coals, the coals and ash are raked out into a metal pail, the firebrick cleaned off with damp rags on a stick, and a wooden door is placed in the opening. The interior of the oven will be somewhere around 600ºF and will gradually decrease over the next three or four hours to 300ºF. You could bake four pizzas and eight loaves of bread in that time (things bake very quickly in an oven like this), and then throw in a pot of beans to finish up.

Kiko Denzer’s book is the bible of earth oven construction. I’ve owned the book for years and it’s very comprehensive. The workshop we did followed the instructions almost to the letter. I think a person could probably do a decent job with nothing more than his book. Still, the process was very much demystified by some hands-on experience, and there’s no substitute for squeezing getting your feet dirty mixing cob, or for holding it in your hands and learning when it feels just right.

On the way home from the workshop I stopped at a rock pile and picked out a few nice-looking rocks for the beginning of our own earth oven foundation. This might be a project for 2011. We bake a lot of pizza and bread in our house.