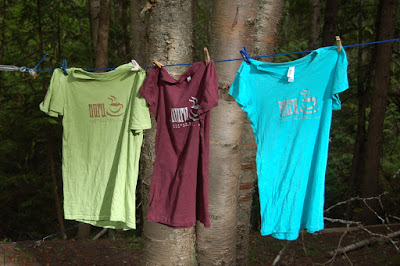 Erin’s day off work is laundry day for her work shirts. The place she works is great. It’s a little café / gallery / gift shop that has great food as well as great staff shirts. It’s at the T-intersection of the two secondary “highways” in town, and gets lots of tourist traffic. But it also has a loyal following of locals, many of the funky/artsy persuasion.

She scoops ice cream, makes lattés, washes dishes, cleans, works the till. She knows more people in town than I do now by a long shot. Her boss is a great first employer: fun, but direct and prescriptive about responsibilities and expectations. Erin, who wouldn’t open her mouth in public for the first six or eight years of her life is now a cheerful, chatty service-industry worker.

Erin has been working here for over a year now. During the winters she works a shift a week. During tourist season it’s several shifts a week, up to 30 hours a week. Last year she saved up and bought herself a laptop. (It recently gave her the blue screen of death. She offered Noah $20 to fix it, which he did. I’m not sure if she paid up.) This year she’s developed a sudden burning desire for an electric violin. Perhaps that’s what she’ll spend her money on.

In the meantime I’m working on getting her to take responsibility for her own Day-Off Laundry.