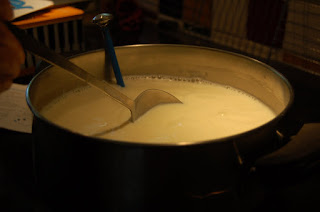 We get nice organic milk from a friend’s cow. The kids don’t much like the taste of milk that hasn’t come through a factory (whatever!), so I try to do other things with it. We’ve made kefir, yogurt, panir and mozzarella cheese. Sophie is actually our family mozza expert, having been taught by her friend and brought the skill home.

Today, with a gallon of nice whole milk to use up, we opted to try a hard cheese, in this case a Monterey Jack recipe from Ricki the Cheese Queen. We started by pasteurizing the milk, bringing it to 145ºF for half an hour. Then, once it cooled to the lukewarm range enjoyed by mesophilic starter culture, we pitched in our culture and half a rennet tablet. Then we kept the milk lukewarm and waited half an hour or so. 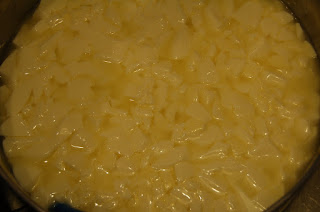 At that point it had curdled nicely. Still maintaining the even 90ºF temperature, we cut the curds. They were more like yogourt in consistency than cheese curds, but it’s like they’re born with little muscles that instinctively contract. We warmed this liquidy mess of lumpies up to 100ºF gradually, stirring every once in a while and gradually the muscular little curds pulled into themselves, contracting and squeezing out more and more of the whey.

After an hour or two we had begun to see how a four-litre jug of milk turns into nothing more than 400-odd grams of cheese. The curds were much smaller and more rubbery and there was a ton of whey. 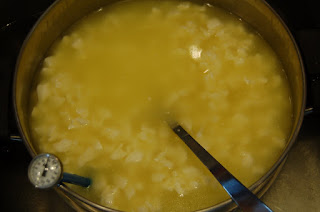 At this point we decanted off the whey by pouring the whole business into a cheesecloth-lined colander. 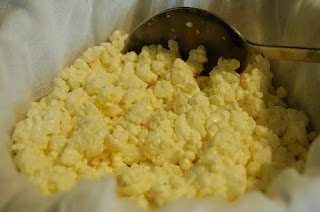 This is what the curds looked like without their bath of whey. Finally we could let the curds cool down. We salted the curds, mixing the salt in with a spoon, or our hands. 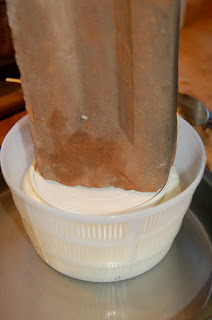 Then we wrapped the curds as tidily as possible in the cheesecloth, placed it in the mould and added weight on top. We started with a pound for 15 minutes, then flipped the cheese over and bumped up the weight to four pounds overnight.

The next morning we unweighted and unwrapped the cheese and began letting it dry for a couple of days. After that we’ll wax it and then we’ll age it for at least a couple of months in a cool area in the basement. 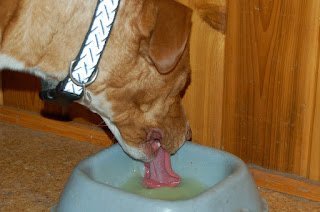 Here’s where some of the whey went. Our dog loves this stuff! (As an aside, this action shot revealed a lot more tongue than we thought she possessed. How does that thing fit inside her mouth?) Unfortunately due to the lactose, it’s a little tough on her digestive tract, so she’s being rationed. Whey is also great for bread which is perhaps where the remainder will go.