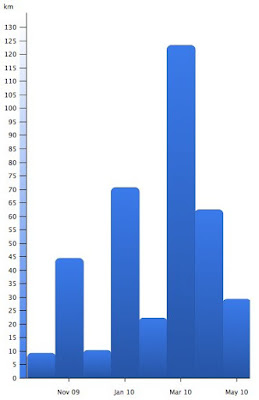 The rain, the rain. We had almost no snow this past winter, which led to a spring which really took hold in early March rather than mid-April. And yet here we are, five days into July and it still feels like spring. There have been a few short stretches of warmth and sun, but it is currently a mere 14 degrees outside, and pouring rain and today is pretty representative of what we’ve been dealing with.

At least the risk of a nasty fire season is dropping and dropping. And at least the temperature is amenable to running…

A couple of weeks ago I decided I needed a goal for my running. Or some sort of structure. The blue graph shows my monthly mileage since my hip improved last fall. Fits and starts. Some pretty pathetic months. It’s not so much that I’m trying to improve my speed and endurance as that I feel better and am happier when I’m running at least every other day. Yet without structure or a goal, running was the thing that fit into my life after everything else. And often it did not seem to fit.

Last year and this spring I had tried to find a race or two to run. My Half Marathon hopes fell by the wayside late last summer when my hip left me hobbling around for three months. And somehow nothing seemed to fit into the spring. Music Festival and Provincials and orchestra concert and Suzuki recital … these thing seemed to happen on all the weekends when there were suitable races within 8 hours drive. 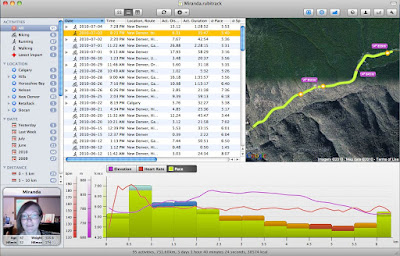 So I have decided to turn over a new leaf and make running one of the priorities in my life. Scheduling it in first, or at least as one of the first few things, so that when work and meetings and volunteer work and lessons need to be scheduled, I can take running into account.

I have planned two races for the fall. The first is an official Half Marathon in September, which I’ve put money down on. The second is a 25k trail run in early October (registration not yet open) which I’ll treat more as a fun run I think. These race plans have propelled me to taking up a running schedule of sorts. I have six runs scheduled into every week. Two are optional but the other four are not. The other four are varied, a mix of interval workouts, easy runs, long runs and tempo runs. I’ve used this schedule before and I like it for its variety and its structure with flexibility.

I’ve discovered RubiTrack, a great computer-based running log for Mac users, similar to Sporttracks, one of the few programs I really missed when I made the move from PC to Mac. That’s a basic window RubiTrack screenshot above. I’m a graph geek and I especially like the graphs it gives me. In the lower right you can see my pace in half-kilometre increments (green bars), my heart rate (red line, with a bit of spurious mis-reading at the beginning of the run due to poor contact on my monitor) and the elevation profile of the run (purple line). The pace bars are topped with colour according to zones I’ve defined. Orange is a little faster than my Half Marathon race goal. Red is a little faster than my fastest-to-date 5k speed. Green and blue are good training zone for longer runs, a notch or two slower than my HM goal. Of course everything varies with terrain. Uphills here are steep and really slow me down, as you can see in the first 2k of the run above. The best indicator of a well-paced run is a steady heart rate tracing, which I think I managed pretty well in the run above.

My Garmin and RubiTrack are also a lot of fun for tracking activities the kids and I do. We can log hikes and bike rides, tally up distances and view our routes at various scales using the Google Map window which shows in the upper right.

On the barefoot front, progress is slow but continuing. I can now run 7k easy in my Vibram Five Fingers, and 5k easy, or 2k quickly, in my bare feet on asphalt. My midfoot strike and a faster cadence are becoming habits, things that I do naturally even running in traditional shoes, even when I’m in the second half of a ten-mile run. My calves and achilles tendons are still acclimatizing to the new style, but the little pulls and tears aren’t happening any more, just a mild over-use soreness that persists for 24-48 hours. My habit lately is to do my fast runs in shoes, and then finish up with a cool-down in bare feet. That means running a mile or two along the highway with a shoe and sock in each hand, which leads to some curious stares from tourists in their lumbering RVs.

Rain, and runs, and races