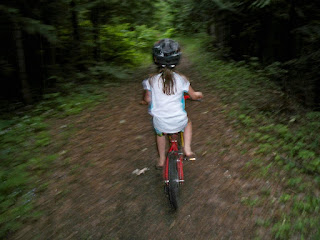 Yesterday Noah, Sophie and Erin did their own ride along this trail while Fiona and I did some running and biking on the highway at a tamer pace. Today I offered to take Fiona and Sophie along the trail at a Fiona pace.

The way we do this ride is that I drive to the lower trailhead, park the van and run home partly along the trail, then up through the forest to our house. Then we all get on our bikes and head up the highway, riding 4 km to the upper trailhead. This is the grunt part of the ride; the sun can beat down on you and the grade can be steep in places.

At the upper trailhead, the hard uphill work has mostly been done and we stop and reward ourselves with a Hippie Bomb. Then we cross the first bridges to the south side of the creek and begin freewheeling down the lovely single-track creekside trail. 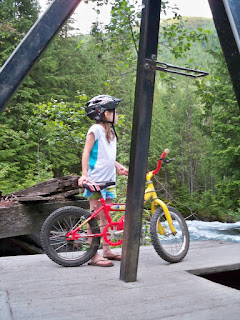 After three or four more kilometres we reach the cable car. This is definitely a highlight of the ride. The car has to be reeled in from the centre of the creek. It will hold up to two people and two bikes, so we have to take at least a couple of trips across. Here is Fiona waiting her turn on the loading platform while Sophie navigates her way across. The cable car is the simplest and most exciting way to create trail access that crosses to the north side of the creek here. The water can be high and despite being called a creek and not a river, it’s pretty wide. A bridge would have been very expensive to build, and difficult to maintain, isolated as it is a few kilometres along a very narrow trail. And the cable car is such fun! 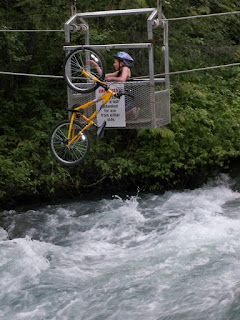 Sophie soloed across and managed to unhitch her bike at the far side on her own. Fiona and I followed in a subsequent trip.

From there on the trail becomes more familiar to us as we often run or bike it from the other end. After another 3k or so it runs below our property (though you can’t really get there from here). We maintain a geocache along the trail here and Fiona and Sophie wanted to stop and check on it. Lots of people have found the cache over the years, yet it remains in good shape.

From there we head on along the last part of the trail back to the van. It is pretty exposed in a few places with precipitous drops and the creek raging almost 50 metres below. Fiona found the trail a little scary in a couple of places, having never ridden it on a bike. She is brave and is not a wobbly cyclist, so she did just fine and finished feeling pleased with herself, with new confidence in her riding skills. 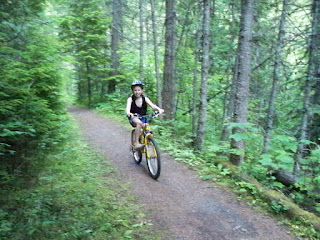 Erin and Noah ride really fast and aggressively. Sophie is much smaller than they, and her bike is smaller and heavier. She cannot match their pace. So it was nice for her on this ride to be the fast kid riding ahead and waiting for the slower riders.

And for me it was a lovely way to spend an evening with my younger two girls. They’re good company and fine little mountain-bikers.