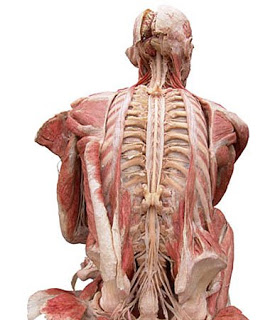 Having been to Calgary for lessons only once since March, we decided to extend this week’s trip to include lessons for both kids on each of two days, giving them a little more music for their mileage. Erin’s been practicing like a maniac ever since it became exam time at school and work picked up. Seems like she needs to be busy to get busy. Noah had done some good work on his viola since the Provincials too.

So we had lessons on Wednesday and then again just before dinner-time on Thursday. That left us almost a full Thursday to fill in Calgary. We had already shopped for a bike for Erin, and for lighting for the kitchen and assorted other odds and ends at IKEA. I’d already done my scheduled runs and taken Fiona swimming at the hotel pool for ages. Erin and Noah had watched more than enough sci-fi on TV. So we decided it would be a good day for a trip to the zoo, or maybe the science centre.

By consensus we decided to try the Science Centre. Once we arrived I remembered that the Body Worlds exhibit was there for the summer and figured we were unlikely to get in. I had looked on-line a month or so out of curiosity and found most weekends were sold out already at that point. But when we walked through the door all times except the evening were available, and so we ponied up and waltzed right in without a second thought.

Having done anatomy in medical school much of the “wow!” factor of the science and anatomy was lost on me. But as art, and presentation, even I was impressed. For the kids it was a very novel experience. They didn’t find it disturbing — except perhaps the first moment holding one of designated touchable kidneys, but even that they found pretty cool. Fiona was very impressed by the coal miner’s lungs. Noah observed, deadpan, upon viewing a skull with the bones all separated and mounted in an “exploded” arrangement “Whoa, he must have divided by zero or something.” Erin and I laughed so hard at that. What I loved most about the exhibit was the expressions of vitality of the “plastinates.” In that respect it was all very far removed from my medical school anatomy lab experiences.

We felt really lucky to have stumbled on the exhibit almost by accident.