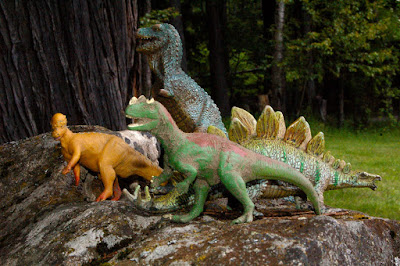 We finally finished disassembling the play structure. This involved sawing timbers away from seized bolts and digging out the four concrete footings. Now it only remains to transport the sandbox sand to the garden and fill the hole in with dirt from the mound left over from when we built the deck. I began this job today and it turned into an exercise in paleontology. There were several dinosaurs (plus a bull and a much-cherished rooster) discovered deep in the sand.

When I took some of the sand over to the compost pile, where we mix up soil for raised garden beds, I noticed that the manure pile was full of red wigglers. So we donned rubber gloves and picked through the pile until we had half a pound of the lively little guys, enough to start back at vermicomposting. We had a worm bin for a couple of years, until our former dog overturned it in the baking sun and chawed down on the container. 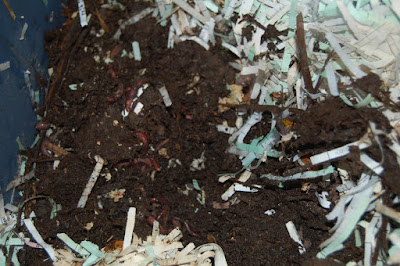 So we started our worm bin again. The theory is that by keeping the food waste in the worm bin we’ll avoid attracting bears to the large open bins in the corner of the property. Those will just be for garden waste. Hopefully we can secure the worm bin and keep it close enough to the house that bears will be deterred from getting into it. Right now it is stored inside the empty rabbit hutch. You can see a few lovely red worms in the photo at left. It’s almost impossible to get a good photo of them outdoors because they dive away from the light as soon as you uncover them.

In the winter I think we might be able to keep the bin in the shop, which Chuck keeps slightly heated, and keep our little friends alive that way. We’ve kept it in the basement in the past, but inevitably despite our best efforts to the contrary we seem to get into problems with flies. For now, outside is perfect.

Yesterday I managed to take a hand-me-down double foam mattress apart, altering the cover on the sewing machine and cutting the foam down to size, re-assembling it as a twin-sized mattress that fits Sophie’s bunk beautifully. She’s been complaining of being uncomfortable in her bed for years; I don’t know what her problem is: we spent a perfectly good $99 on that mattress 14 years ago. Anyway, she is a happy camper now and slept way past her 6:30 am alarm this morning. 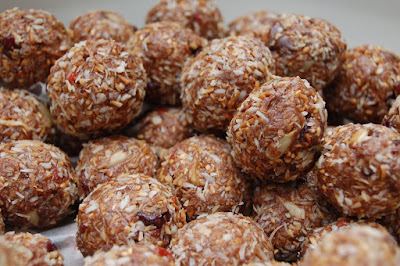 Sophie has been baking today: chocolate coffee cake I believe. Fiona has been inventing recipes for savory dips and dressings. Creativity in the kitchen is always fun. The other day we made several dozen of these Hippie Bombs (renamed; formerly Energy Balls), which have become an instant hit.

Combine all ingredients except coconut. Mix with spoon, spatula or hands as required. Form into balls with your hands. (They can be anywhere from truffle-sized to 1/4 cup in size depending on your preference. Ours are about 25 ml in volume.) Roll in coconut. Store in airtight container between layers of waxed paper. You could easily substitute almond butter for the peanut butter, or other dried fruits like chopped dates or raisins for the ones we used. The kids are trying to convince me that to be real energy balls these need to have a chocolate-covered espresso bean at the centre, but I’ve not been convinced.