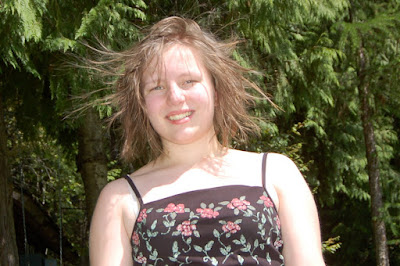 Who needs a Van de Graaff generator? This is Erin’s hair after (a) a short hard mountain-bike ride (b) a shower and (c) lying about in the sun on the static-electricity-generating trampoline for 45 minutes.

She’s an awesome mountain-biking buddy. Enjoys going fast on the narrow single-track we’ve got around here. Has lots of stamina. Doesn’t complain about anything the trail thrusts in her path. So far she’s using Noah’s bike, but has designs on a nice model of her own. Today we rode out to the top of the linear park / trail that runs through the canyon near our house, and then rode it down all the way to town. It’s a route I run pretty regularly but it’s a totally different experience on a bike with speed on your side and so many fun obstacles and woop-de-doos up banks and around tight curves. Crossed the cable-car, zipped over bridges and boardwalks and deked between boulders and old railway ties. We planned our route to avoid the blow-down we had to carry our bikes over last weekend. Nothing like scrambling through brush and climbing over massive logs up a 20-degree slope … while lifting a bicycle over every obstruction, pedals catching on everything.

My purchased-used-20-years-ago Stumpjumper got a tune-up yesterday and despite a couple of seized adjustment screws seems to have a few more miles on it yet. I have to kick the chain into the inner two cassette rings with my foot but mostly I just avoid those gears. Maybe next year will be my buy-a-bike year. There’s been such an evolution in mountain-bikes over the past 20 years; I’ve never even tried front shocks, an innovation my kids take for granted.