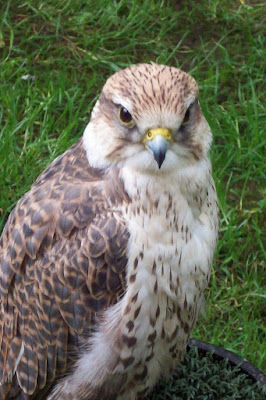 While in Duncan we visited a raptor centre a few minutes from the place we were staying. They had a few dozen birds, from baby eagles to falcons, hawks, owls and full-grown bald eagles. We were able to watch the flying demonstration, where they encouraged a few of the birds to fly in the open from perch to perch, handler to handler, off into the forest, back onto the gauntleted arm of a handler for a treat, and then off and about again.

Chinook the red-tailed hawk was hormonal and rather recalcitrant. He flew by a few times but then went and found a perch. He did not want to come back out of the tree and kept us waiting for a good while, but was finally enticed back with a dummy rabbit on a string doing sneaky tricks on the lawn.

Athena the gyrfalcon (left) was more straight-laced and willing to play things according to the script. She did some amazing acrobatics for us, chasing down a dummy bird swung about in the air and catching it mid-dive.

Oliver the barn owl was pretty nifty. He was a little spooked by the wild bald eagle who was in the top of a fir tree overlooking the flying field, just checking things out. But he flew for us, keeping a little closer to the safety of trees and handlers than usual. 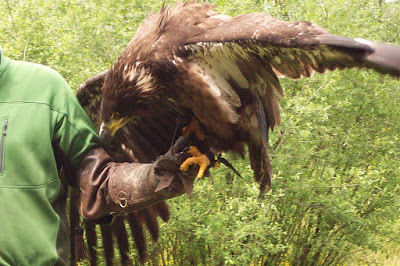 The biggest bird we saw up close was this immature bald eagle. She was fully grown, but not feathered out as “bald” yet, a colour change in her plumage which will take her another two or three years. We see bald eagles a lot in the treetops and the skies near home. I remember when we first moved to BC almost two decades ago it was a really special thing to see a bald eagle. The discontinuation of DDT use has caused their numbers to rebound very quickly. Bald eagles around home are so common that we often don’t even mention them if we see one while we’re driving. But seeing them up close is another matter entirely.

A few years ago a guy in our community rescued a mature bald eagle which seemed blind in one eye and was hopping and walking about the rocky beach. He’d worked with birds before, so whoever found it called him up figuring he was the local expert. He kept the eagle in his garage for a few days, feeding it up on lake trout and kokanee salmon to see if it would get interested in flying and hunting again. It ate heartily but seemed not to see anything on its right side, and had no interest in hunting, so after a few days he moved it out to a raptor rehab centre near Vancouver. We were invited over while it was still in his garage, and got right up near this totally wild magnificent bird. Jim was killed tragically in an accident with a falling tree on his property last spring. I think my older kids will always remember him with that eagle. 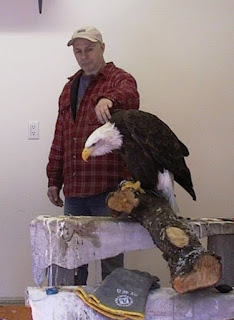 Fiona, though, didn’t remember meeting Jim and his bird. She was too young at the time. So it was great that she was able to see the partly tame birds at the raptor centre.