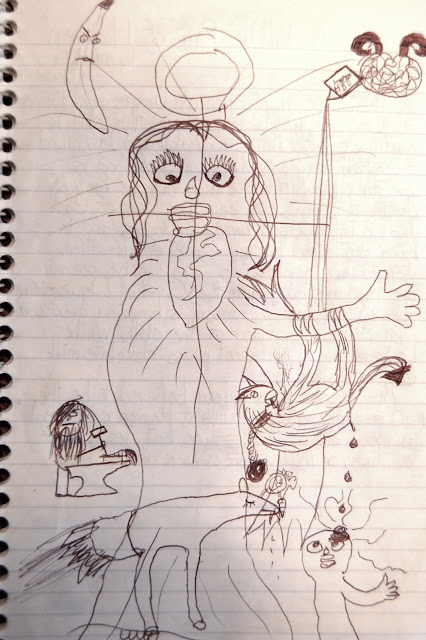 My kids pride themselves in their weirdness. The more random, bizarre, eccentric, irreverent and facetious they are the better. While we were on our way to Duncan last week they engaged in some collaborative cartooning and story-telling. This particular drawing started with four small wobbly horizontal lines, and got passed back and forth between Erin, Noah and Sophie as each added features, lines and blobs and tried to make the picture head off in weird directions. As the picture got more and more complicated, explanatory stories grew up to weave together the random elements. Eventually they decided to write down some of the explanations. Two selections follow, with their accompanying cartoons.

“A Little Piece of Heaven. This is an illustration of [your-deity-of-choice] disciplining a demon sloth. As you can see, this sloth is guilty of defecating on disabled children and smoking marijuana. The Lamb of God is assisting by biting the sloth with the Fang of Justice. [ed. note: The Lamb of God bears the Twin Fangs of Justice and Karma] The Lamb of God has a jetpack and lovely eyelashes, and is being motivated by the Carrot of Motivation, forged by Hephaestus who can be seen in the background, forging the Carrot of Depression. The Banana of Judgment is hovering overhead, silently disapproving of the sloth, while Lactose the Intolerant pours chocolate milk on the sloth’s head. This illustration is widely believed to be the most accurate representation of Heaven ever created, as many artists fail to realize that Hephaestus is an emo hobo.“

Lactose the Intolerant has got to be the funniest demigod name ever. I laughed until I hurt.  And look at little Hephaestus the emo hobo, hard at work at his anvil. He’s so cute I’d like to adopt him. 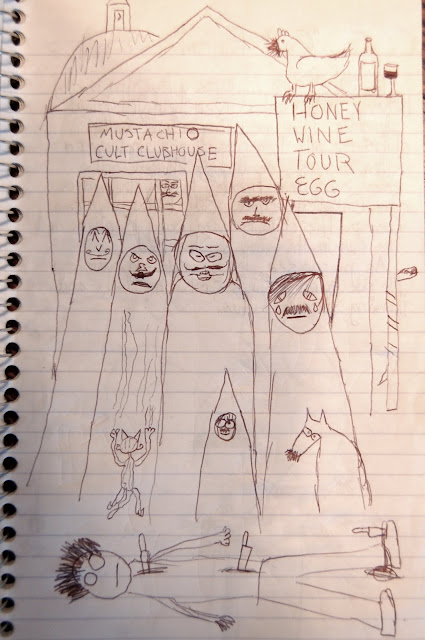 “Cult Portrait. This illustration captures a touching moment between the Mustachio Cult members after their first ritual slaughter. They are posing in front of their clubhouse with their beloved pets, including a kitten, a snake, an alcoholic chicken and a cross-eyed dog. From left to right their names are Dudley, Frank, Bill, Rufus and Emo George. The child is called Baby Bunting, and the man in the window is Shy Paul. As you can see, they run an egg business on the side to raise funds for buying cloaks and throwing slumber parties.“

This one was loosely inspired by a rural home/business/homestead that we spotted while driving with a hand-painted sign that announced:

We wondered how many years they’d been trying to sell their egg. It was a very old sign.

One thought on “Storytelling”