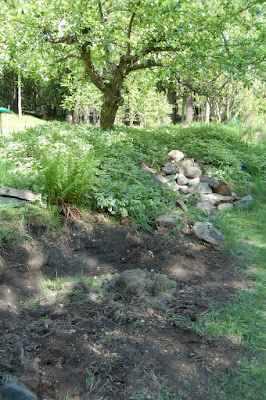 Over the past couple of days I’ve been moving rocks to release the pond liner, and then removing the liner and filling in the hole. The photo doesn’t give a sense of scale: the pond liner is 3×5 metres, so this is a fairly large area.

The new pond will be much smaller — basically just large enough to serve as a receptacle and reservoir for the waterfall. I’ve roughed it in at about 2 metres by half a metre. I’ll cut the liner down to size. 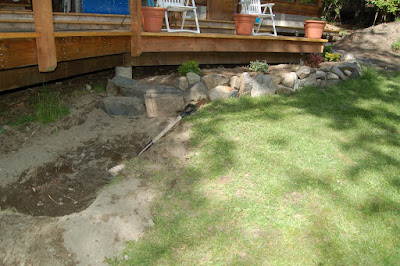 Here’s where I’m putting the new pond: just in front of the “apron” extension on the deck. I plan to build a rock wall up in the rear of the pond in part to hide the underneath of the deck. 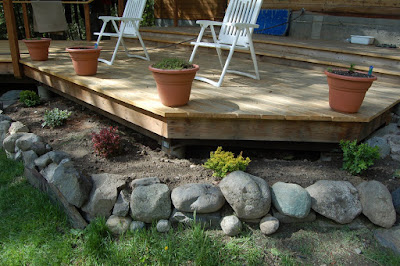 Fiona and I bought some shrubs when we were in Nelson for her last piano lesson of the year. So we’ve also pushed ourselves to complete the little rockwall garden in front of the low portion of the deck — despite the rain and cool weather we endured earlier in the week. We’re just using whatever rocks we can find lying around the property looking for a home. I think I could become a rock mason in my next life. There’s something really addictive about moving warm rocks around, looking at them from different angles, trading one off for another, until they find their perfect resting place, snugged in next to their well-fitted friends.

I think we still need some deck furniture soon, though, wouldn’t you agree? After we get the repairs done on the van …

2 thoughts on “Moving a pond”