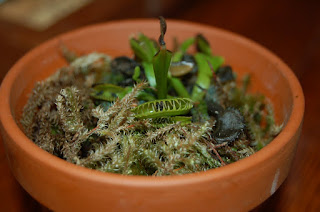 Fiona and I went to the garden center in Nelson this week. We bought some bedding plants as well as some shrubs and herbs for the garden we’re creating in front of the deck. Our old kitchen garden was clear-cut and covered when the deck went in, so we’re starting anew.

Just as we were about to leave we discovered a little flat of Venus Flytraps. I’d always wanted a carnivorous plant, and Fiona, it turned out, not only wanted one but was quite knowledgeable about them. She told me all about trigger hairs and how big they could grow. It’s fun to discover that now even my youngest child is now full of knowledge that I don’t have, and I have no idea where she encountered it.

It would have been too cliché to name it Venus, and we felt for sure he was male. So we settled on naming him Milo. Venus de Milo. Get it?

He’s just a baby. But he’s already been fed so many flies and ants that I’m sure he’ll end up suffering from childhood obesity. Will we be able to keep him alive? We don’t do so well with indoor plants, but we’ll see.

On the way home from Nelson we had bad luck again. Last week we had got held up an hour from home by a nasty accident that closed the highway for half an hour and were late for our dinner meeting. Then, after driving to Calgary on Thursday and back on Saturday, and to Nelson all day on Sunday for a Suzuki performance and back home in the nick of time to get to orchestra rehearsal, and turning around and driving back on Tuesday for piano lesson, we got almost all the way home from Nelson only to discover that heavy rains had caused a mudslide that had closed the highway. We were told it would be a minimum of four hours before the road re-opened. We sighed, did a U-turn and drove back to Nelson, arriving exactly two hours after we’d left. Then we headed north, taking the longer route home, one mountain range over. Sigh. It was a long day. Fiona was a trooper. I hope she still has stamina left, because we have a day and a half of driving to do this weekend to get out to Vancouver Island.

We listened to podcasts to keep ourselves from getting too bored. Stuff You Should Know, Vinyl Café and Radio Lab were on the playlist yesterday. We recommend them all highly.

Milo, and the Slide

2 thoughts on “Milo, and the Slide”