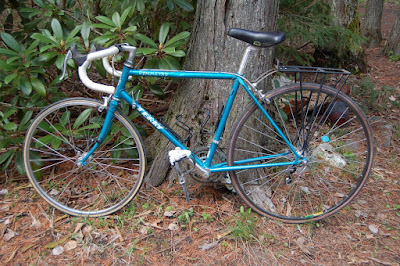 This is probably the first significant item of real quality that I bought. Fresh out of my internship, I dropped a thousand dollars and change on a good road bike. This is a lesson in the wisdom of buying quality. My 21-year-old bike is still a wonderful machine. Today I started tuning it up. I want to start riding it more again, and it is still completely up to the task.

My love affair with bicycles began on my 11th birthday. I was given a “ten-speed” bike, a real grown-up one with 27″ wheels. I remember the day well. Even though it was almost May there had been a bit of an ice-storm overnight. The bike had been hidden in the neighbours’ garage. I could not ride it outside until the ice melted, but I fell in love with it inside. It was silver.

I rode that bike everywhere. I went on adventures. Even back then I was drawn to distance. My brother and I would get up at dawn and bike out of the city and along county roads to other villages, exploring and relishing our freedom. We probably got up to things my parents would have been horrified by. But hey, we survived, and I have such memories of those days!

As the bike began to wear out, I became a bike mechanic. I could tear that bike apart to the ball bearings and put it back together. I bought parts and tools, I replaced chain links, I repacked the headset and crankset. I lubed, I cleaned, I replaced, I repainted. But eventually over the years the poor thing just kind of wore out.

I bought myself a new bike, slightly better-made, thought still a cheap chain store bike, about the time I headed off to university. It wasn’t a great bike but I looked after it really well and added a few accessories to make it look great. It was stolen from where I’d locked it up in the parkade by my apartment about three years after I got it.

My next bike was a road bike with better components. I think I paid $400 for it. The brakes and gears worked really well and it was a bit lighter. I started enjoying longer rides on it. I fitted it with panniers and biked all over southwestern Ontario on it. Not extended tours, but 50 or 100 km a day over a weekend, visiting people, going places. During my internship year I biked all around the Avalon Peninsula in Newfoundland on it. I also acquired an inexpensive mountain bike to help me get around the hills in St. John’s, and to help bail me out in the winter when my horrid car stopped working.

The next year I had an actual income. I was living in Halifax, another region with superb road-riding routes. And I fell in love with the Terry Symmetry I stumbled upon in at the Trail Shop. It’s a bike engineered for short women — that’s me! The top tube is very short, thanks in part to the 24″ front wheel. Other things are sized down too — the handlebars, the cranks, the brake levers. It was the first bike I rode that wasn’t too long and stretched out for me and it seemed to weigh next to nothing. I sold both my other bikes and bought it. I rode a hundred miles on it the following Saturday, and felt just fine the next day. I rode it lots and lots in Nova Scotia.

When I moved to BC, though, I moved to a town on the side of a mountain, with nothing but hills … and a huge network of world-class single-track mountain bike trails. So I bought a mountain bike and cranked most of my miles on that. And once we moved to the slightly-flatter town where we now live, we had kids, so even if I was riding on the road I was generally hauling two kids in a trailer, and I needed the granny gear of the mountain bike. My Terry Symmetry spent a lot of time collecting dust after that.

Now that I’m in decent shape again, and the kids no longer need to be hauled about in a trailer, it’s time to start riding my Terry again. It needs some new rubber up front and a new real derailleur cable before too long, and I want to upgrade to SPD clipless pedals. Other than that, though, everything is ticking and humming and spinning as it should.