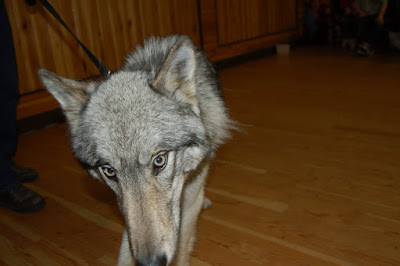 Only in a small town can a guy roll in on Monday, visit with a few friends, offer to do a talk on wolves and a visit with his own “pet” wolf, and get a full fifth of the community’s residents out to the event a mere two days later. Standing room only.

Fiona took this picture. She got up close and personal with Tundra. Heck, everybody did. Scrubs and cuddles and licks and sniffs and those piercing eyes looking as if into our souls. We learned a lot about wolf behaviour and about the complex ecology of top-order predators. Who’d have guessed that re-introducing wolves would produce massive increases in waterfowl populations? Why? Because without wolves, ungulates over-graze and prevent the growth of saplings that beavers rely on. Without beavers, wetlands are severely reduced. Without wetlands there are no waterfowl. 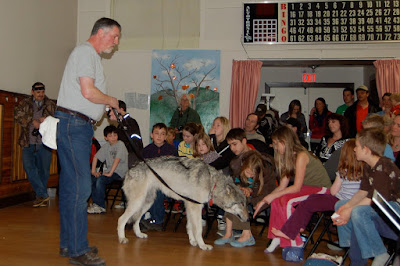 Tundra was a pretty amazing, magical creature. Her strength, intelligence, grace and alertness were so engaging. I was pleased that her owner spoke at length about why having a wolf for a pet is generally a really bad idea. The main reason he came back to was that the bond between himself as pack leader and the wolf is so strong that they simply cannot be parted. No flights, no non-wolf-friendly holidays, no pet-sitters. That and the four or more vigorous walks a day … for up to 18 years.

There are wild wolves around here, though I’ve only seen one once — a fleeting glimpse from a bridge. We’re very glad to have met this one, even if she’s a human-conditioned ambassador for the species rather than a wild animal.