Although I’ve kept herbs and occasional greens growing next to the deck, I haven’t grown a proper garden since (checks blog archives… ) 2008. That must have been the point at which the water line broke, and I started taking on more of the summer Suzuki institute administration, and the kids were losing interest in growing things.

A lot can happen in 11 years. Especially in the realm of goutweed. Somehow this vegetation from hell sneaked onto our property with the gift of some rhubarb about 20 years ago, and with me not beating it back on an annual basis it has taken over. It’s not quite kudzu or Japanese knotweed, but it’s got to be close.

The effort to reclaim some sort of a garden began months ago when I started digging a trench for a replacement water line. It had to be deep enough to facilitate winterizing, and it had to go under and through countless tree roots because … well, the forest. So it was quite a slog.

Next, the fence. I figured I could do the first bits of planting and fence immediately afterwards, but the dog-who-digs had other ideas. So the fence had to be completed first. I dug a few posts, stretched some salvaged fencing, banged things together.

And then one day at the end of April, with a few tomato and pepper starts languishing on the dining room table, I looked out at the frame from the old trampoline and the liner from the ice rink and thought “those could be a greenhouse!” So I set to work. Within 48 hours I had a passable greenhouse. I used some scrap poles and lumber, and bits of garbage ABS pipe, and some rebar scraps and a webbing tie-down strap and some 3M house tape.

The only money I (eventually) spent was $15 on a zipwall doorway that I cut into one side of the tarp. The greenhouse is definitely not pro-quality: it’s fairly large and not insulated or at all air-tight and therefore doesn’t really do much to protect plants from the cold at night. And because the tarp is white rather than clear, on overcast days it doesn’t get all that warm. But it has been so much better than nothing, and it took my little tomato-starts from spindly 3″ sprouts to bursting out of gallon pots begging to be planted in the space of three weeks.

I’m especially pleased with my eggplant since I had never tried to grow one before, knowing they need a long warm season. I bought it as a seedling as I hadn’t had the forethought to plant one in late March, not having had my greenhouse epiphany by the point. I’ve nurtured it along, and it is doing really well. It is now setting fruit. In June already!

The goutweed is still the bane of my existence. I’ve dug out kilos of rhizomes, double-screened a lot of soil, organic-mulched large areas to a depth of 6 inches (only to have the damned stuff grow through without a second thought), plastic-mulched the crap out these same areas, and in this year’s reclaimed beds I’ve dug and pulled and weeded and mowed and mulched and yanked and mowed and pulled. And still I feel like I’m only making minor headway. I have two small beds for my (very crowded) tomatoes and peppers, and another for some horseradish, and that’s it. And every day I pull dozens of goutweed sprouts from those same beds that I’ve dug over and screened so meticulously. Although the sprouts are looking increasingly anemic, which I take solace in.

I also put in a new garden in the lawn between the fruit trees for some strawberry plants, and blueberry, raspberry, blackberry and haskap bushes I bought.  I had put together a berry plant order from a distributor with some other locals. A lot of people jumped on board: I ended up taking delivery of almost 200 bushes late one evening! Thankfully they were mostly for other people. 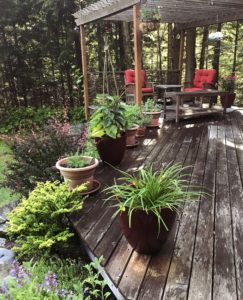 In the kitchen garden area I’ve got the usual herbs and greens going but also some pretty things. So that area is kind of attractive again too.

Because I didn’t imagine my way to a greenhouse until almost May, I missed the boat a bit this year. And the fencing, goutweed-from-hell and water line slowed things down a bit. Hopefully next year I’ll be that much further ahead and will be able to make more of a go of things. For this year it looks like we’ll get some fruiting nightshades, that blueberry tart and not a whole lot else. But it’s pretty. And it’s progress.

Back to the garden