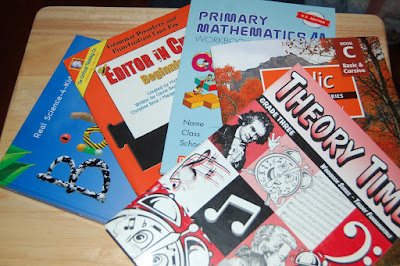 This has been a homeschooling blog for years, but now that we’re finally doing some structured schooling I thought it would be appropriate to post about what we’re doing. Fiona’s morning starts at about 8:30 am. She usually grabs some breakfast first and then settles in for some bookwork. These days she is pretty happy with what we’re using and is moving up levels almost as fast as I can order them. Left to right, in photo…

Real Science 4 Kids Biology I. This is pretty lightweight stuff, but it’s clearly presented, not patronizing in its narrative style and lovely in its layout. The author is apparently a Christian fundamentalist but this book is perfectly fine in a secular context.

Editor-in-Chief Beginner Book. Nominally for Grades 3-4. A little challenging for Fiona, suitable for older kids filling in gaps. I’ve written about this before. It’s a great approach for helping kids, especially perfectionistic ones, learn to write well by having them find and correct other people’s mistakes.

Singapore Primary Mathematics. Fiona did a good bit of Miquon Math but preferred the clarity of Singapore Primary Maths and so she transitioned into that after the Blue Book. Singapore PM works beautifully for Fiona because she has a very intuitive understanding of math, easily handles the mental math demands and needs very little practice. It also stays refreshingly friendly and to-the-point right through to the 6B level (approximately equivalent to Grade 7 in North America).

The Getty-Dubay Italic Handwriting series. I first bought these years ago because they seemed likely to work well for Erin who is a lefty and who liked the look of the italic font. They seem to work well enough for the other kids, who appreciate the fact that there’s almost no transition to cursive once the manuscript font is well-learned. Fiona is my first kid whose handwriting hasn’t lagged behind her supposed age-grade. She’s just beginning Level C which is I think 2nd grade level and can print reasonably neatly with proper letter formation. What a surprise, after three late-bloomers!

Theory Time Grade 3. She started with this at the Grade 2 level and enjoys it. It’s friendly and unintimidating, the best theory program I’ve seen for kids and pre-teens. She’s pretty advanced in her instrumental studies, so she’s encountered a lot of the theory in this book already in informal ways. But it’s nice to do a little systematic gap-filling.

We don’t do all this every day. We do math and one to three of the others.

Most days also involve violin and piano practicing, and some independent reading (currently Harry Potter). And although we’ve been slacking lately, we were also reading a bit of Story of the World Volume 2 most evenings, and/or watching the corresponding Teaching Company High School History DVD course lectures. And we always have a nightly family readaloud on the go. Currently that’s the first Percy Jackson novel, the Lightning Thief.

And then there’s all the unstructured stuff, the learning I’ve mostly been writing about for years, which still seems to fit in around the edges.