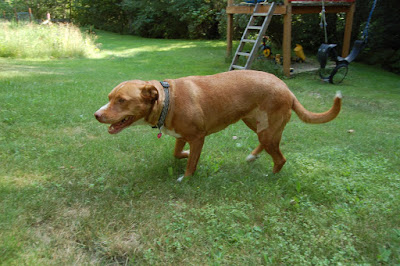 It’s true I had a rocky first week. Had to go see the vet again, was admitted to hospital and watched overnight. Finally felt like eating again after 5 days, but that kibble I used to eat? Not what an injured dog deserves. So I held out and eventually my people acquiesced and gave me canned food. Felt better for the food.

Then I made a mistake one day … forgot myself and ate some kibble. I tried to hold out again for the canned stuff, but they were onto me. Eventually I gave up and started eating the dry stuff again. A dog can get used to anything, I guess.

The cone. Hated that cone. Once my bruises were better I discovered that by contorting myself I could get my nether regions twisted around so that they’d fit into the cone. Perfect for licking myself silly, which I set to doing. I also became an expert at bashing into my peeps’ legs with it. The family eventually got it. Figured the cone wasn’t doing anything anyway, besides tripping me up. So off it came. I rewarded this trusting gesture by laying off a lot of my licking.

My burns have gradually improved. I’d say they’re about halfway healed in now. Still oozy and gross. If you drop by for a visit I’ll happily lift my leg and show you, and you’ll probably say “ewwwww, gross!” but they don’t feel too bad. And I get around pretty well. I’m back to chasing my kong and playing “tug” and doing the “roll over” thing that seems to please the humans to no end, simple creatures that they are.

The only worrisome lingering effect of all this is the startling self-righteous boldness the cat has assumed since my accident. This will have to be dealt with.