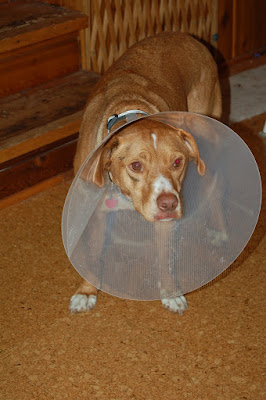 Limpet, our dog, has a “thing” about the van. She gets very excited when we leave and loves chasing us. She doesn’t do this with other vehicles, not even Chuck’s truck, but she knows the kids and I are normally in the van, and she gets very excited. Normally she barks a bit and races up the grass at the side of driveway. She stays off the road and it’s kind of funny how hard she runs. The long uphill is what she enjoys the most — she goes flat out until she runs out of juice and gives up about halfway up the hill. When we’re gone she hangs out by the house and doesn’t normally hear us until we’ve already done the hill. She comes cheerily towards us, usually meeting up with us at the carport.

I had to pick Erin up at work on Saturday afternoon. I took the van and Limpet did her usual “chase” routine. Ten minutes later I returned home. While I was gone a couple of friends were over and they were looking at decking lumber with Chuck in one of the sheds tucked into the edge of the forest off beside the steep downhill part of the driveway. Limpet was with them rather than in her usual location by the house. And so she was alerted much earlier than usual to our arrival home. Her poor brain misfired, I think. She thought “van! driveway hill!” and peeled out of the woods in heady hope of a chase up the driveway.

Unfortunately I wasn’t going up. I was going down. And the point where she hit the driveway was about 2 metres beyond the obscuring corner of forest, and about 2 metres beyond where I was travelling at 20 km/h. I slammed on the breaks. It’s gravel. I just skidded. The dog disappeared under the front grill.

It was awful. There were sickening dog-screams. She was trapped. You’ve heard me rant before about the lack of ground clearance of this vehicle. There was almost no room under there. Though I hadn’t felt myself run her over with the tires, I couldn’t believe there was room underneath for her. Chuck and the other two came running and looked. I was told to roll forward a couple of feet.

And then the dog took off running, tail between her legs. On all fours, looking very much abashed, but apparently almost as right as rain.

Still, it wasn’t as miraculous as all that. She was covered in grease and smelled of burnt fur. She started limping. She didn’t seem to want to change position. Going from standing to lying down proved excruciating. She didn’t eat or drink. She went off and hid under the laundry stoop.

We finally got her to the vet today. She has no broken bones, but she’s got a nasty burn in her groin area which she’s been licking horribly, along with a lot of other bruising and general soft-tissue injuries. She’s in a cone, which she’s not at all pleased with, and on antibiotics and painkillers. She’s not really eating or eliminating well yet. She did get down a deer sausage or two, but that’s it for the past couple of days.

We had planned to go camping this week, but that was nixed. Now we nurse the dog instead. But it’s pouring buckets of rain, so camping wouldn’t exactly have been idyllic either.

10 thoughts on “Sad yet miraculous story”