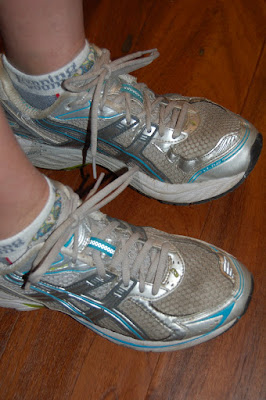 I knew of precisely one other runner in my town. Running isn’t exactly a hot sport here. People hike, they mountain bike, they ski in the winter, they canoe and kayak, they walk the trails. But runnings definitely isn’t big. So it has been tough for me to find race events to use as goals. Most Calgary events take place on Sundays, and we leave Calgary for home Saturday morning. The only event in Nelson so far this year was cancelled. I’d been looking at races 4 to 8 hours away, wondering how I’d ever manage the logistics for something like that, given how full my life is and how tightly scheduled the kid-activities are.

But there’s a campground about half an hour from here that hosts a 10k Fun Run/Walk/Bike every year. I saw the blurb in the paper last week. Today was the day. I hadn’t run since Tuesday when it had become clear during and after my run that there was some sort of foreign body embedded in the sole of my right foot. Chuck and I dug away at it, going quite deep, but couldn’t see anything. Of course it was much worse for a day or two after that. I was pretty sure whatever had caused the pain was still there, but gradually it seemed things were feeling a bit better. By Friday evening I was weight-bearing again and did a short slow run with Fiona and Sophie and it didn’t really feel a whole lot worse afterwards. Yesterday it was better still. So I figured I was okay to run today.

To call it a race would be an overstatement. There were about 50 people walking the route, a dozen cycling and 6 or 8 lonely souls running. There was no official timing or keeping track of finishing order. There were kilometre markers. There was an official start. But that was all.

Before the event began I met up with a new-to-my-town runner who single-handedly increased the number of local runners by 50%, a woman about my age who has been running for a while and ran a Half Marathon three weeks ago. She moved here last week. We ended up running together the whole time, talking (puff, wheeze) as we went along about our kids, who are similar in age, about our community, about Garmin Forerunners (she has one, but couldn’t find it this morning after her recent 1500-mile move). It was nice. I’d never run with anyone before and we seemed pretty well matched. The course was half secondary highway and half trail, exquisitely flat for this mountainous area, since it mostly skirted the shores of a lake. Temperature was in the mid-70’s with the sun out but not terribly humid. A lovely day for a run.

My watch time was 53:56, for what that’s worth. We were the first runners to finish which isn’t saying much since there were only a handful and only a couple of the others were younger than us. But it was a good time for me and when I finished I was still feeling good. Except for whatever is still in my foot, which feels a bit worse again. Oh well.

There were zillions of donated prizes and they drew for prizes by lottery until everyone got something. It was cute, informal and homey. But not really a race. Still, it’s all I have for now, and I’ll count it in my training log as a race.