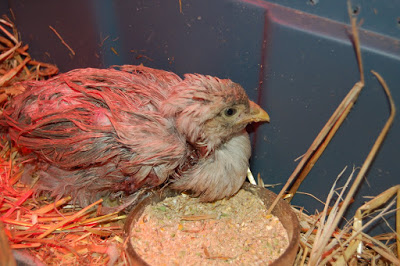 The seven hatched chicks, now heading into adolescence and standing 8 to 10 inches tall, were moved out to the chicken coop a week or so ago. They hunkered inside the henhouse at first, intimidated by the older generation. Overall things were going well. The big chickens were scarfing the little ones’ higher-nutrient food, but other than that they’d been respecting each other pretty well and there wasn’t any undue aggression.

Today I guess the little guys finally got comfortable enough to start looking for adventure in the far reaches of the outdoor corral. And alas, they discovered a crack large enough to allow for escape. Noah noticed a couple of small chickens sallying around the smithy and sent up the alarm.

We ran outside in the chilly downpour and quickly had four of the five escapees back in the coop. But one was missing, and ominously so was the dog. We knew right away that they were together and that the scene wasn’t going to be a pretty one. After quickly securing the escapees, stopping up the crack, we found the dog on the lawn with a small feathery lump. The lump wasn’t moving and was soggy and significantly defeathered. I looked closely and it was apparent that it was still breathing but there was blood and flesh showing. I picked it up and resigned myself to breaking its neck to put it out of its misery, something I knew was going to be horrifically difficult to do.

But then I looked more closely. Its eyes were open; it moved its legs a little. What had looked at first to be an open neck wound was just a large raw defeathered area. There was a similar area on one wing. A little blood, a lot of missing feathers, but more mess and slobber and baldness than actual damage.

We brought the poor fellow inside and put him under the heat lamp to dry out. Initially he looked like a monster-sized freshly-hatched chick with the addition of blood and bald patches. Unable to stand, he lay trembling and limp in the box, still a sodden lump. I told the kids I thought he probably wouldn’t still be alive in a few hours.

But gradually he’s drying out, warming up and looking much better. With his remaining feathers dried out a bit and some muscle tone returning the raw bald flesh on his neck doesn’t look like the gaping wound it did at first. He’s eating and drinking now, getting up on his feet and shuffling around a bit. Maybe he’ll make it. If he escapes without infection he’ll likely regrow some plumage in a few weeks and be ready to rejoin the coop. We’re all rooting for him.