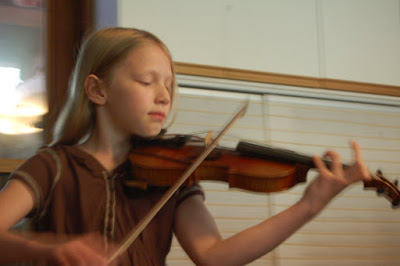 Summit Strings played at the official grand opening of the newly-refurbished Silverton Memorial Hall on Friday night. The hall is beautiful. The washrooms are no longer located at stage right, opening almost onto the performance space, behind thin doors through which much could be heard. Now they’re sensibly located at the back. There’s portable staging, new chairs, a brilliantly refinished floor and a fully equipped commercial-style kitchen. Not to mention audiovisual bells and whistles, from a sound system, video screen and projector, satellite TV and internet capability. Wow! The Summit Strings kids have grown up playing in this hall. It houses the first grand piano to reside in the community (ours is the second) and is the only venue big enough for large audiences. Erin performed her Bach piano concerto movement with orchestra here back in 2004. The community orchestra cut its teeth here with an early performance in 1999. Most of the videos I’ve ever posted on this blog take place at this hall, whether at recitals, ensemble performances or summer programs. We are thrilled that the hall has had new life breathed into it.

And so the kids provided musical interludes for the open house quite happily, knowing that they were lending support to a venue that has and will continue to provide them with many opportunities.

The next morning we starting rehearsing for the recital. With sixteen students performing and our accompanist arriving just the day before there was a lot to fit into Saturday. And then Sunday we were back at the hall with its shiny floor and lovely acoustics.

Fiona performed Humoresque, a piece she had learned a year ago, a comfortable old favourite. She played it with the shifts, with her vibrato, and nice phrasing and articulation. I had remembered only today that she had bailed out of her last recital performance after 16 bars. Today there was no hint of worry; her piece was comfortable and secure and she enjoyed performing.

Sophie played Fiocco’s Allegro. It was a solid clean and confident performance. You can see from the rehearsal photo above that Sophie really looks like a violinist now. She sounds like one too! A year ago she was a tentative player who didn’t like to use full bows or big tone. She’s now projecting confidence in her tone and musicianship in a huge way in her solo performances. She plays in a way that really conveys the beauty of the music. She’s got a good heart, this girl, and it now shines through her music and sparkles with her tone.

Noah played the first movement of the J.C. Bach Concerto in C Minor. This has been a real transition year for Noah, as he’s moved from weekly lessons with his grandmother to monthly or bi-monthly lessons in Calgary. He didn’t have the maturity, self-teaching skills and advanced musicianship that Erin did a year ago when she made the move, so he’s still trying to find his stride and make the infrequent lessons work well for him. But boy oh boy, something’s working! His J.C. Bach, on which he’d had little guidance in polishing up for performance, was stunningly musical and technically flawless. He’d never played it with piano until yesterday and after he heard how it fit together with the accompaniment there was an instant blossoming of all his musical smarts. Contrasts, phrasing, dynamics, articulations … everything just fell into place by the second run-through. By today’s performance it was more amazing still.

As of two weeks ago Erin had been planning to play a well-learned unaccompanied Bach solo partita movement. But at her last lesson her teacher told her she’d rather she played the 2nd and 3rd movements of the Bruch Concerto in g minor. Poor Erin! She hadn’t even really finished learning the 3rd movement and neither movement was anywhere near polished. She’s been working mostly on Mendelssohn and another Bach, not Bruch! She also had her first-ever final school exams coming up, three of them, a couple of lingering English assignments and a bunch of shifts at work. But at her teacher’s urging she set to work with a vengeance.

As it turned out the two movements were too long for the program. They would have made up 17 minutes on a program that was supposed to fit 16 students into an hour and a bit. And rehearsal time was limited. So she opted to do the 3rd movement, the one she been scrambling hardest to learn. It’s an incredibly technically demanding fast movement, the most difficult of the three by a long shot. She was stressed. It wasn’t how she likes to perform, without the security of fully-developed mastery. She was still firming up her fingerings and memorizing it at the rehearsal. But by this morning the improvement was dramatic and this afternoon she really nailed the performance!

Fiona is always impressively precocious, sweet and petite. Erin is always the advanced student who blows everyone away with her proficiency. Today, though, all four of my kids shone. Each one of them made me so happy and proud.