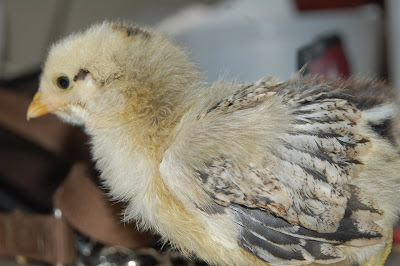 Last night I was putting Fiona to bed when she commented on the rhythmic shrill cheeping coming from the basement. At first she thought it was some sort of electronic alarm. “Oh, it’s just a chick,” she said, after listening again. I almost thought nothing of it. We can often hear the chicks from upstairs. But the fact that Fiona had noticed this particular cheeping as unusual made me wonder.

Sophie and I went down to see why someone was making such a racket at midnight. Nothing seemed amiss in the chick box. Except then I did a double-take and realized that there were only six chicks. There was Peep, diligently giving a noisy distress call, with only five siblings beside him.

There was a brief “oh no!” moment. Our basement is very small but there are about a million places for a frightened chick to hide. But Pip was quickly located tucked in behind the back corner of the box. Just sitting there, quietly wondering what had happened to his family, and where the lovely warm red light had gone. He was none the worse for wear.

The chick box now has a chick-escape barrier on top.