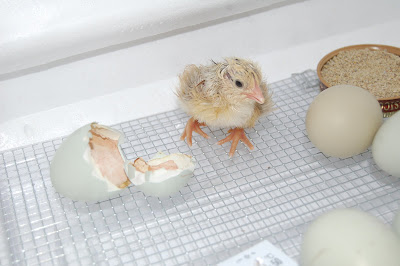 I was at work this morning when the ‘back door’ phone rang in my office. I excused myself, explaining to my patient that my younger kids were home alone and that I needed to answer the phone which they knew was only for very important things, and had never used before.

“We have some very exciting news,” said Fiona’s voice from the other end of the line. “We have a chick!”

This little guy hatched from egg #10 (laid on the 10th, the first egg we suspected was fertile), meaning he’s a day earlier than we expected. His cheeping had awoken Noah whose bedroom is next door. The kids had looked after him wonderfully and were really excited by the whole experience. We have at least four more chicks expected over the next ten days or so.