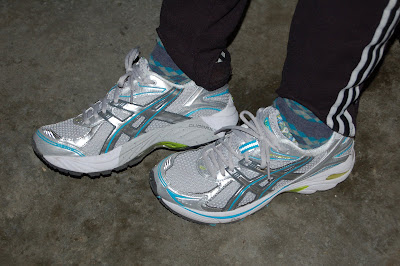 It’s been one calendar month since I started running. I’m still climbing the really steep part of the conditioning curve, the part where tangible gains come quickly. Going from 0.1 fitness to 0.4 is a four-fold improvement, even if you’re still a huge long way from being a 10. It’s fun and very rewarding at this stage. I’m past the point where I hurt for a day after every run, and yet still in the phase where I can see significant improvements from one week to the next.

Geek that I am I’m keeping an on-line log of my runs and heart rate stats. My resting heart rate has dropped from 62 to 52 in the past three weeks. (At this rate it’ll go to zero by November, heheh!) I’ve run 55 miles since I began. Okay, I walked a bit of that during the first couple of weeks, but not too much. Distance is much easier to improve than speed, and I’d still be considered a “penguin” (slower than 10 minutes per mile) by real runners. But it’s fun to watch the numbers change anyway. My first run was 3.5 km at 12:53 per mile. One month later I ran 7.2 km at 10:24 per mile. I expect I’ll be a penguin for at least another month, but I think I’ll eventually bust through that 10 minute barrier.

Look at my new shoes! This was how I celebrated my runniversary, at a running store in Calgary. They are lovely and light and cushiony and do not require any duct tape to make them wearable.

Fiona and I are doing BikeRuns together. She rides her bike while the dog and I run. It works pretty well and forces me to slow down on the uphills, rather than killing myself as I have a tendency to do. She often has to wait for me on the long steep downhill stretches, and that’s where I get to really turn on my fairly pathetic speed.