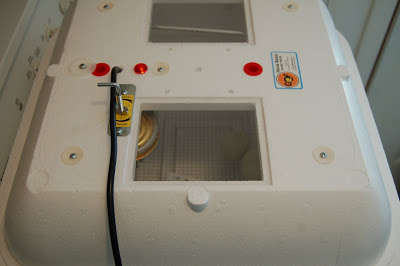 Last fall we acquired a lovely Ameraucana rooster from some friends of ours, a quiet complacent guy named “Peepee” (or “pp” as in musical “pianissimo” since he has a quiet and infrequent crow). We’d had bad luck with roosters — mysterious coop deaths, predation by bears or raptors. And our collection of Ameraucana hens dwindled from three to two to one little lady named “Toy” last year.

But we had this idea that we’d like to breed more purebred Ameraucanas. They lay lovely blue-green eggs, and are pretty to look at with their varied colouring, but are expensive to buy, since they’re a “rare heritage breed” and can only be purchased through the mail in lots of 24 or more, far more than we need. So a month ago we purchased an inexpensive Hovabator incubator in the hope that we could actually hatch some chicks of our own.

Then it remained only for Toy to resume laying. She is not a good layer. She’s two years old now, which doesn’t help, and she has always been the last hen in the flock to start laying. By March there’s plenty of daylight, and we were beginning to lose hope of getting any eggs out of her. But finally yesterday the first blue egg of 2009 showed up … and today, another. She was just taking her sweet time about things.

Are these fertile eggs? We don’t know. Peepee’s masculinity is unproven at this point; he’s certainly not very assertive with his flock of ladies. But we are hopeful. We’ve set the eggs in the incubator and are studiously monitoring the temperature (aiming for exactly 100 F, with good stability so far). We penciled a sun on one side of the eggs and a crescent moon on the other, to facilitate twice-daily turning. And we’ve marked them with the date they went in the incubator, so that in 21 days we’ll know which ones to watch. Ideally we’ll hatch 10 or 12 chicks between the end of April or the beginning of May. In reality we’ll be happy with just one — especially if it turns out to be female.