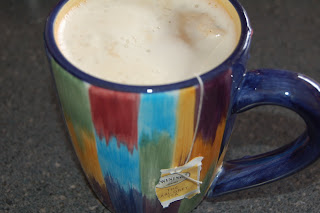 This family has become addicted to London Fogs. The kids and I are prone to drinking two to three a day — each! They started out as a BC lower mainland invention, quickly spread to Washington state and the interior of BC, and we are doing our best to export the contagion elsewhere. Here is our recipe, refined for ease of production by children:

Set tea to steep with water. Steam milk and add this along with the other ingredients. Mix. Remove teabag and begin drinking as soon as the fog reaches a nice medium brown tea-like colour.

We sometimes use a Tbsp. or two of vanilla syrup, the kind cafés have on hand to make vanilla lattés with, in lieu of the brown sugar and vanilla extract. That’s the official barrista way of making them. And because our dairy consumption has gone way up since we discovered these, we’ve recently begun making a soy-based London Fog premix. We make 2 litres of soymilk, add a 1/4 tsp. of salt, 3/4 of a cup of sugar and 3 Tbsp. of vanilla extract. Then all we need to do is combine one part Earl Grey tea with one part premix for a quick and easy dairy-free version.

We highly recommend London Fogs for greasing the wheels of family meetings, for improving math concentration, and for cozying up with for a readaloud.