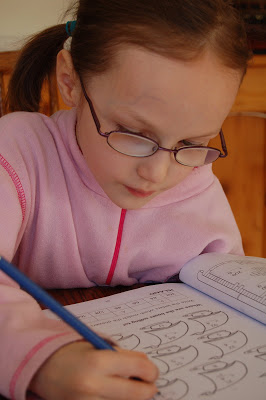 Now it has returned.

The interest in math. She is barrelling ahead in her Singapore book again, easily internalizing things that I expected a child so young would really struggle with. The efficiency of her learning still surprises me. She’s excited to be mastering new concepts and algorithms, to be filling in pages, starting new sections, seeing her progress through the program. But that’s not what this post is about. This post is really about three or four months of Fiona not doing math.

Blogs and on-line communities present a very distorted view of homeschooling. You frequently see only the “best of”. You don’t see the long stretches of nothing. For three or four months Fiona’s interest in math has been negligible. For more than a hundred days over the past few months I could have posted “another day of no math.” But I didn’t. Why not? Because I wasn’t worried so I didn’t feel the need to speculate about what was going on. Because it’s hard to take cute photos of a kid “not doing math.” Because I was just not struck by the urge to write about how she had barely touched a pencil since Hallowe’en.

But today, recognizing again how easy it is to inadvertently present a distorted image of homeschooling on-line, I am posting this cute picture but instead choosing to inform everyone of the many many recent days when Fiona did not do any math at all. The scene above is a change from what has been our recent “normal.”

Why do kids go through phases like this, when they suddenly lose interest? I think there are two main reasons. The first is that they recognize that they’re not as ready as they’d like to be for what’s next in their learning. The second is that they’ve got something else they’re busy learning that is taking precedence. I can see that Fiona has struggled a little with the multi-step word problems Singapore introduces at this level; the bar-diagram method of pre-algebraic problem-solving for these sorts of problems just doesn’t sit well with her yet. And there’s no doubt that piano is where her intellectual drive has been flowing. This time it’s been easy for me to see why math shifted onto the back burner for a while.

However it’s not always clear to me what the reasons are. Not at the time. Sometimes I only see it in retrospect, because during the loss of interest phase the stuff that’s instead come to the front burner hasn’t necessarily revealed itself yet. But I now, after years of watching children learn, know it’s cooking. I’ve seen it enough times — several months of aimlessness and loss of apparent interest followed by a sudden bursting forth of new abilities, motivation and productivity. I don’t doubt it any more.

5 thoughts on “Of back burners”