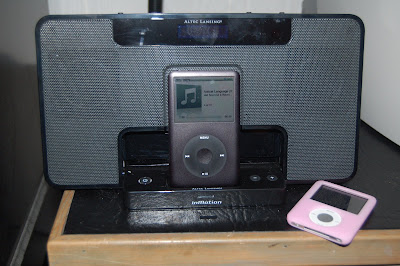 We are an iPod family, it must be said. With the addition of Erin’s new Nano, and the passing down of her old Nano, everyone but Chuck now has one. (He’s been repeatedly asked if he’s interested in one, and has said no every time. He seems more interested in broadcast radio, which the iPods don’t have. But a few days ago he saw an ad for the Touch and expressed an interest … but I think he only wants the cool games, so I’m pretending I didn’t hear.)

Erin bought the first iPod, a 2nd generation Nano. She called it “my precious” (LOTR reference) and used it endlessly, for both her violin/piano repertoire listening and for pop and classical entertainment music. A year later Sophie, who had been hoarding her allowance for years, bought our family’s second Nano. She uses hers for classical music, Vinyl Café podcasts and the occasional audiobook.

After becoming addicted to podcasts on my computer, I finally caved in. I bought a used Nano on eBay for thirty bucks and was hooked. But then three or four months later something tragic happened. I left my iPod in the hotel in Calgary. We were about 20 minutes out of town on our way to pick up some rabbits, when I realized. I called the hotel. They retrieved my iPod and promised to hold it until my next visit. I barely made it through the month. When I returned to Calgary — horrors! My iPod had been stolen from the lost and found room! Thirty bucks and I’d only got three months of ecstasy.

I held off for another month. But when Fiona’s furiously hoarded allowance had accumulated sufficiently that it was time to head to the electronics superstore for her first Nano I realized I could hold out no longer. I bought myself a new iPod Classic. It was an incredible extravagance for me. I have great difficulty spending money on myself. For six months afterwards I carried a little piece of paper around in my wallet, ticking off lattés that I had not ordered when taking the kids to lunch, cafés or whatever. Once I accumulated 80 ticks I figured I had done an iPod’s worth of financial penance.

Erin had long outgrown her old Nano. We’d never given our kids a little hunk of technology before, but she had made such careful and thorough use of her Nano that for her birthday this year we bought her a new one, eight times bigger and two generations newer. Noah, who used to play the iPod luddite and mutter about how there was nothing you could do with an iPod that you couldn’t do some other way, and what a frivolous little gizmo it was, received Erin’s old one and is now an enthusiastic convert.

We bought a little cassette tape adapter and now have iPod connectivity in the minivan. And last week I bought us an inMotion speaker dock. I listened to the Bose SoundDock (for three times the price — I certainly wasn’t going to spend that much) and this little guy from Altec Lansing and I honestly couldn’t hear the difference, and I am pretty picky about sound. It charges all our iPods, gives us portable speaker output and even has an FM radio for the dad-guy.

But the main reason I’m writing this post is to recommend some of the things we love to listen to on our iPods. I’m into lists lately; have you noticed?

1. Suzuki repertoire recordings. I think every Suzuki family should start their “career” with a notebook, instrument, music book, a listening CD and an iPod to rip the CD to. It makes that daily listening so easy.
2. iTunes downloads of multiple recordings of advanced music repertoire so that students can listen to various interpretations of the pieces they’re learning.
3. Mike Ford‘s “Canada Needs You” Volumes 1 & 2, for a fun, funny and catchy musical introduction to various characters and episodes from Canada’s history
4. RadioLab‘s podcasts. Science, curiosity and a quirky fun production style.
5. Vinyl Café podcasts. Stuart Maclean’s Vinyl Café storytelling has had this family laughing for years. Now the CBC publishes a podcast every week.
6. Audiobooks from Audible.com. Here’s the real reason I don’t mind driving to Calgary every month. A new audiobook will keep me happy through hours of boring driving while the kids nap. Recently I’ve enjoyed Eleanor Updale’s “Montmorency” (a YA novel), Arthur Golden’s “Memoirs of a Geisha” and André Dubus III’s “The House of Sand and Fog.”
7. This American Life podcasts. I look forward to these every week. A characteristic style of storytelling and the interweaving of themes and ideas. A breath of fresh air from south of the border.
8. Boomerang Audiomagazine. They offer a free podcast from time to time, but you can also subscribe to the magazine or download backissues. We subscribed in CD format for a few years but the iTunes route is so much simpler. It’s an intelligent, entertaining and informative audiomagazine for children 5-12.

3 thoughts on “An iPod family”