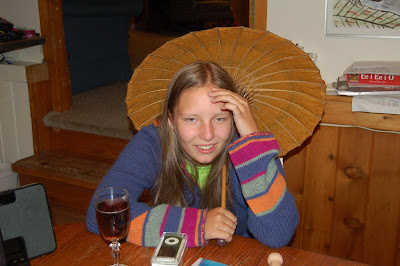 She boarded at noon in Bangkok and arrived in Vancouver about 16 hours later, just after noon on the same day, the dateline being what it is. Almost no sleep on the plane. Cleared customs in just over an hour. It was the only place she was ever asked for the lawyer’s letter giving her permission to travel without her parents. And oddly enough she was also for the first time questioned about why she hadn’t been in school for the past two months. She answered, muttering something about independent study, to which the woman responded “oh, homeschooling, right!” and seemed satisfied.

We drove three quarters of the way home, caught some fitful sleep overnight at a friend’s place and then on towards home this morning, arriving on the dot of noon. And she’s still awake. Her biological clock is all off-kilter but she’s wrestling it back into submission very effectively — it’s now almost noon tomorrow in Thailand and she’s still up.

We had an almost-two-months-belated 15th birthday celebration tonight. I gave her the sweater I had knitted for her which fits fine and looks great on her, and we had also got her a Thai cookbook and the new iPod Nano she’d been lusting after for months. What a spoiled kid! She had a beer with dinner (to help soften the culture shock, since she’d become rather accustomed to and fond of beer overseas) and we enjoyed lemon cheesecake. And now she’s getting to know the new computer games Noah had procured in her absence.