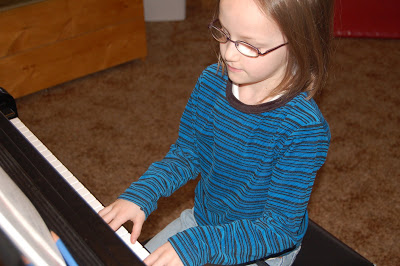 Fiona was assigned her first little invention on the piano this week. As inventions go, it’s about as simple as they come. On piano, “invention” means two-part counterpoint, a sort of interweaving of two voices talking at the same time. She liked the sound of the piece when Sophie played it and so she asked her teacher if she could learn it. “Of course!” said Anne, her teacher.

I sat back, inwardly taking a deep fortifying breath. Anne has a very particular way of teaching inventions. First you learn a few bars of the right hand. Then you practice singing the same section. Then you learn a few bars of the left hand. You practice singing that. Your next task is to sing the few bars of the right hand while playing the left hand part. This can be unbelievably difficult, because as you’re thinking about your left hand playing its notes your brain and your voice are inextricably pulled towards singing those same notes rather than the ones on the other staff. It is very difficult to sing something different from what you’re playing. Essentially your brain has to simultaneously create two different tunes, one in the hand and one in the voice. Inventions are not a case of melody and harmony, so what you’re singing doesn’t really fit with what you’re playing in the usual sense. But even that’s not as difficult as the next step, which is to swap the two voices. The problem, especially for young voices, is that you are forced to sing the left-hand part up an octave, meaning that there’s far more overlapping of pitches and tonalities than actually occurs in the piece as played. And, of course, our brains tend to follow the upper voice, typically the “melody”, far more readily in multi-part pieces, making it extra difficult to focus properly on singing the “lower” voice.

And so you go on, phrase by phrase, through the piece. Eventually you put phrase-bits together. Only once you can do the whole piece from start to finish this way, both voices, are you to play it “hands together” as written.

I had my suspicions that this system was way beyond the developmental capabilities of a 6-year-old. I remembered Erin managing it, after a lot of struggle, at age 11 or so, albeit with more complex music, but I couldn’t imagine her doing it much younger than that (she’d studied with a different teacher, with a different approach, when she was Fiona’s age and stage). But Fiona often surprises me, so I reserved judgement. I figured that maybe, because this piece was simple enough, she might be able to sort of do it after a lot of practice.

So Fiona and I sat down the first day and started work on the first few bars of the right hand. Then I would sing the left hand and she would play. Then she tried singing with me. Invariably her mind and voice would get pulled into the other line, the one she was playing. But she kept trying, that day, and the next. There was one problematic bar right near the beginning, and we honed in on that and practiced it repeatedly. All she had to do was sing two A’s while playing an off-beat four note passage, beginning on A — but oh, the pull of the moving notes was so strong. She tried and tried … and gradually she could hold her note, more or less. More practice. Soon she could hold her note easily.

And after that it came, all in a rush. To master that bar, her brain had needed to make a neat slice between two streams of focus, and once that separation was made everything else proceeded beautifully. Within a day the she could do the whole piece, both voices. This morning she e-mailed her teacher:

guess what? i can already sing one hand of QUESTIONING and play the other hand both ways. today i tride to do it hands together and it was easy.

The piece is still not polished, so she didn’t want to record it yet. Every week she excitedly records a couple of short pieces for her SelfDesign Learning Consultant as part of our “Observing for Learning” anecdotal reports. I suspect Questioning will be part of next week’s report. Here is this week’s recording.