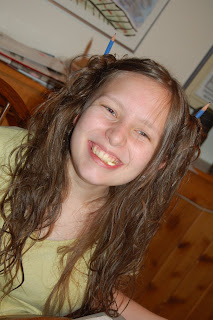 Erin went to school kind of giddy this morning. Not looking like this, I might add — this photo is from another giddy moment a few weeks ago. She had no pencils in her hair when she went out the door this morning.

It’s the last day of school before the holiday break. The whole school had planned to go sledding at a ghost town near here, but the weather was deemed too cold for all-day enjoyment by kids as young as 5. So instead they’re having a pancake breakfast, ping pong tournaments, games in the gym and a LAN party in the Facilitated Learning Centre where Erin spends most of her day.

But that’s not why she was giddy. She had decided she wanted to finish up the content and testing and main coursework for two of her three courses before leaving for Asia. And that meant an entire second writing portfolio to pull together (not officially due until the end of January) and half of her science course to complete in the last 7 days of school (the other two students doing Science 10 in the FLC are taking until June to complete it). I’m not sure why she decided she wanted to do this, but she sure was motivated. She works far better under pressure anyway. The pressure focuses her and she thrives on the excitement of a looming deadline. Alternatively I could describe her as a procrastinator, but since the December 19th deadline is one that she created for herself, much earlier than anything the school would insist on, I’m not sure the word applies to her in this case.

The pace has been amazing. To illustrate … Her science course is divided into Ecology, Chemistry, Physics and Earth Sciences units. Last week she was doing the last chapter in the Chemistry section and hadn’t even looked at Physics or Earth Sciences. Since last Friday she learned all the content in those sections and has done something like 7 chapter tests and 3 unit tests in science. Her teacher can hardly print the tests fast enough. And her marks have gone up, from averaging low 90’s to almost unrelenting 100 percent scores. And then last night, after performing in three different musical roles on the evening Christmas concert, she stayed up all night pulling together her writing portfolio, writing two or three of the components from scratch in the wee hours, editing and compiling the remainder. She got a 90 minute nap on the couch with the dog before downing a coffee and heading off to school, quite giddily pleased with herself, ready to hand in her portfolio and do her last three science tests. Assuming they can find a corner of the school where she can work quietly for a couple of periods without interruption from all the revelry.

She did make sure she was there in time to participate in the pancake breakfast so that she could say goodbye to all her friends. She won’t see them until March.

If nothing else I think she’s proved that cramming is a very effective schooling strategy for her. I’ve always described her as an “immersion learner” who tends to get very locked in and focused on one thing at a time. I’m pleased that she’s managed to make her school experience this fall work well for her in this sense. When she comes back she plans to focus on math, and possibly move on to another course or two.

School girl on a roll