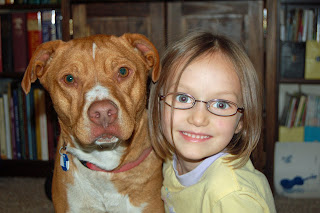 I mentioned a couple of weeks ago that we were beginning to realize that we needed a dog again. The rest of the family was all for it, and had been for some time, but I guess I had borne the brunt of the grief and guilt over our dog-from-hell experience a couple of years back so it took me longer to come around. We’d had a wonderful dog before that, but that great guy had been trained when Chuck and I had no kids except our puppy. It was very different trying to train an immense dog in a household with small terrified children. Once bitten (or, should I say, head-butted), twice shy.

Enter Baby Girl. She had been in the shelter system for over a year. Picked up as a stray and unclaimed, she’s about three years old and had been living with a particular foster family for the past year. They’d pretty much decided to keep her because they enjoyed her so much. But then health problems and hospitalization of her caregiver got in the way, and I happened to be searching the on-line listings of dogs for adoption a day or two after she got actively listed for adoption again. Her size sounded about right (Staffordshire Bull Terrier / Lab cross, with a likely helping of mutt) and she had such glowing recommendations concerning her temperament (“she is one of the best dogs they’ve had (they’ve had hundreds)”) that we immediately decided she was someone we’d like to try out.

She loves us. We love her. She’s mellow most of the time, but with a healthy dose of rambunctiousness when encouraged to play.

Everyone assures me they’ll help this time. Though I notice I’m the only one so far who has taken her out in the sleet and dark to do her business. But she loves me best, and with this girl that’s some compensation.