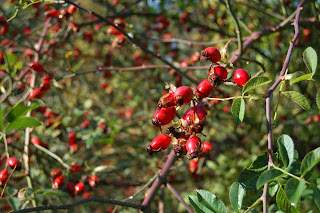 My mom is hosting a rose hip epidemic. She has a wild rose bush that has taken over a corner of her yard which produced a profusion of hips this year. I took my younger two down to help pick. We’d had a couple of hard frosts, even down in town, and the time was right. First we made a stop at our favourite chestnut tree in town and bagged enough chestnuts for a Christmas loaf. Then it was on to the rose hips. Wow … blue sky, green and yellow leaves, bright orange-red rosehips, warm sun! Who could have asked for anything better. 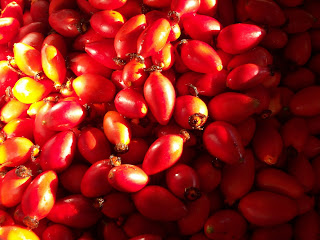 We picked and picked. Fiona and Sophie kept throwing out guesses (and critiqueing each others’ guesses) as to how much we had picked, estimating numbers of rose hips and overall weight. We had decided to go for five pounds, with a bit of a cushion to make sure.

When we got home, we naturally had to measure our harvest. We had almost exactly six pounds, so we were pretty pleased. But the girls also had to know how many we had picked. So we counted out a hundred, weighed them, and then divided that weight into the total to find that we had picked about 1040 rose hips.

We washed and cleaned them, simmered them in some water and then mashed them and pressed the juice from them. It was a lot of work, but I had a lot of help. For now the juice is in the fridge. In a couple of days we’ll make jelly, likely by combining the rose hip juice with apple cider. It’s extra yummy that way. 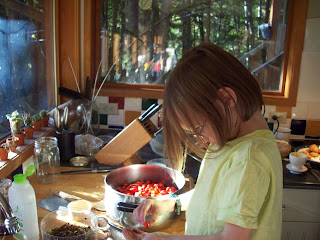 We all enjoy the ‘something from nothing’ aspect of wild harvesting. Rose hips are everywhere around here. A person could pick for days down by the lupine garden and not make a dent in the rose hips there.

It was an elderly Japanese man who moved to our town as a WWII internee who first introduced me to the wild rose pathway by the lupine garden and told me what a great tea hips make and what a great source of Vitamin C they are. I really wish that more people would make use of the natural bounty beneath their noses. There is certainly some sharing of local / traditional wisdom that happens in our town … but we could sure use a lot more of it!