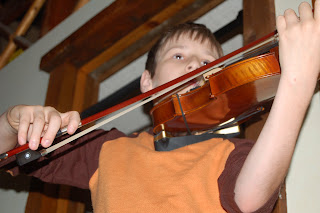 Noah is growing. Though still quite small for 11, he’s at last outgrown his half-sized (12″ vibrating string length) viola. His spanking new 13″ Sabatier arrived today. He is thrilled. The A-string has a lovely viola timbre. His smaller instrument sounded very much like a violin on the upper strings, and of course there’s more depth, more volume, more ‘oomph’ all the way down to the bottom of the C-string, as expected. The finish is lighter and yellower his old 12″. Otherwise, though, it’s obviously the big brother to his old one — it has that distinctive Sabatier workmanship and shape, the light weight and the curiously strong sound.

He got it out of the case and tuned it up. Oddly enough, he decided to test it out first by playing an artificial harmonics scale! Of all the things … I can’t imagine anything less likely to show off the tone and timbre of a new viola. But to each his own. For what it’s worth, the harmonics are at least twice as easy to play on this instrument. And once he’d tried that out, it wasn’t long before he was playing a meaty ‘forte’ on all four strings, pushing to find the more distant limits of his newly available sound. 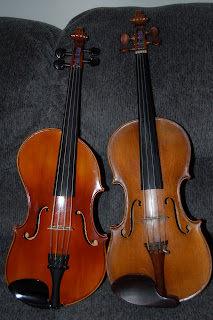 Here you can see the unique shape of the instrument. Noah’s equivalent-to-3/4-size viola is on the left, and my full-sized violin is on the right. I think the resonating volume in his is a little bigger than that of a full-sized violin, even though length- (and weight-) wise his is still clearly a 3/4-sized instrument. The resonating chamber is pulled over to the ‘low’ side of the instrument, under the C-string, all of which makes for a very viola-type sound. This is definitely not a violin dressed up like a viola, it’s a viola to its core.

The biggest difference to Noah with the new size is in the bow that came with it. His 1/2 sized viola came with a clunker of a fibreglass stick, which was heavy and got a decent sound from a viola when playing basic strokes but didn’t do much else. This time around he’s got a responsive octagonal wood stick which, wonder of wonders, actually likes to perform ricochet, spiccato and sautillé! Noah is thrilled. The bowing techniques which were causing him grief last month are suddenly so much easier.

Life is good in our little corner of viola-land.

A boy and his new viola

5 thoughts on “A boy and his new viola”