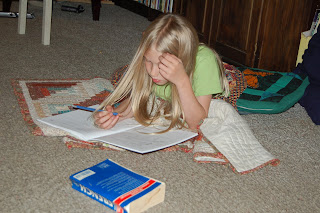 We’re an unschooling family. We don’t normally do much in the way of structured schooling. When Sophie expressed an interest in L’Art de Lire French early in the summer I forgot all about it. She asked again. “Oh,” I responded, feeling guilty, “were you expecting me to buy it for you — like sometime nowishly1?” Well, yes, she said. So I ordered it.

And though I’d forgotten all about it, it turned up in the mail. Right during one of the busy music school weeks. Fine. I figured we’d get to it some day. After all, like most curricular resources we own it would be more for inspiration and dabbling, not diligent study.

Sophie didn’t get that memo. She tore into it. There’s a teacher’s manual that I suspect lays the whole curriculum out and guides the parent in introducing the language. I haven’t yet peeked inside the cover. But that hasn’t stopped Sophie from working blindly through the student workbook with ongoing enthusiasm. Last evening when I got home from rehearsal she asked me a question about conjugating irregular verbs and I realized she’d actually been working at it pretty darn effectively. She’s making good progress.

Today I was gone all day again. Work, lessons with the older kids, chamber music rehearsals. I got home at 7 pm and Sophie was again working on French. She’d been stumped for a while, working only with the student book. But eventually she’d dug around and found an old French-English dictionary and done a bit of gap-filling by herself. “It’s okay,” she said, when I apologized again for not having spent a moment with her over the past couple of weeks on it. “Dictionaries are fun. I can do it myself.”

It’s only very rarely that I’m called upon to be a teacher to my homeschooled children. You’d think I could find at least a few minutes to sit down and look at the French program and then offer her a little guidance. Unfortunately I seem to be accumulating a string of unexcused absences from school. Fortunately Sophie doesn’t seem to be suffering too badly.

1. nowishly [nou-ish-lee] adverb
at the present moment, more or less, though with some wiggle-room to allow for inertia, procrastination or disorganization, or all three.

5 thoughts on “Absent from school”