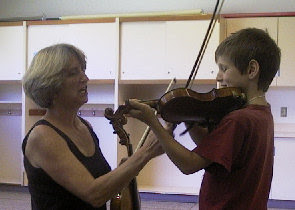 That’s an old photo, from 2005. Noah got his first Sabatier viola about a year before this photo was taken. He’s since outgrown that 1/4-size instrument and recently has outgrown the replacement 1/2-size. His 3/4-size (13″) will arrive within a week or so.

He’s also getting a new teacher. Sort of. He and T (in the photo) have had something of an ongoing teacher-student relationship since the summer this photo was taken. They’ve had at least a few lessons every year. She lives in Calgary and is one of the teachers Erin studies violin with. (Violin and viola are pretty similar technique-wise, but the more advanced you get the more the repertoire diverges on the two instruments. T knows a lot of the advanced violin repertoire, so she’s fine with teaching Erin the pieces she knows well, at least for now. T & her husband J, a violinist, team-teach Erin.) But now that Noah is outstripping his grandmother (a violinist who hasn’t studied viola as well) in learning the viola repertoire, it seemed like a good time to shift the primary directing of his studies to a violist we’re visiting every month anyway.

Since T is in town for all the local summer music school stuff, we’re putting the two of them together a few times so that they can build a foundation for ongoing less frequent work together in the fall and onwards. Even though they know each other pretty well, every year Noah is a year older. Funny how that happens. It means that when they do work together they kind of have to shuffle around a little to find where to meet in terms of challenge and expectations. Sometimes they don’t quite meet up at a first pass.

Case in point. Last week they had a brief lesson together. Somehow in the space of about 25 minutes they worked on three brand-new challenging bowing techniques: richochet, collé and sautillé (string players will be nodding, wide-eyed, at this point — it’s a huge amount of technique). All three have potential application in one of the Beethoven Dances Noah has just learned, and it was a very productive lesson I thought, given the time constraints. Lots of enticing new things to experiment with over the weekend, and the promise of more lesson-time this week to follow up on this stuff. Noah was really happy about the lesson.

But the next day he got extremely frustrated during his practicing. Somehow he had got it in his head that these bowing techniques, each of which typically takes an intermediate-advanced student months to master, should be learned immediately. He and I had a talk about it, and I reassured him that this was a slow gradual process. He seemed happier. The next day he was thrilled that his sautillé worked for 3 or 4 seconds on an open string note. The following day he reported that his ricochet was getting easier as he stiffened his bowhand a little. His expectations now seemed more realistic and he was happier.

Today was his next lesson. T asked him to play his Beethoven Country Dance to start out. He’d picked the tempo up to what she’d suggested and had clearly done some excellent work on it. But he struggled with the advanced bowing techniques; they weren’t nearly ready to be inserted confidently into the piece and suddenly his realistic expectations were out the window. He was upset, really upset, that he hadn’t mastered all three techniques to the point that they were easy and flexible and usable in his repertoire at performance tempo.

It was a case of his perfectionism and high standards not being held in check with an explicit enough declaration of expectations. If T had said “don’t worry about the new bowing technique — just play the piece,” he probably would have been fine. Or “try the ricochet if you like; I know it’s a bit of a gamble at this point — no big deal.” But as it was he decided as he played that she would only be satisfied or pleased if he nailed it all. And he didn’t. And he veered perceptibly close to tears.

T reassured him that this was all just optional stuff for the Beethoven, and of course he wouldn’t have it all down pat in four days. They moved on. Noah’s feelings seem to recover. They moved on to start work on a new Brahms piece (Hungarian Dance #5) and did some really good work on it.

This evening I chatted with T about how Noah’s lesson had gone. She said how badly she felt about how she’d handled the bowing stuff in the Beethoven and how sorry she was about upsetting him … and she hoped he would be able to feel okay about her and about the viola.

This evening I also chatted with Noah about how his lesson had gone. He said it was “totally the awesome-est!” and that he’d come home and practiced yet again, for the third time today, and had tons of fun trying out the ideas he’d been given.

Aren’t kids funny? You just can never tell what they’ll take home from an experience. Noah’s feelings are sometimes strong and close to the surface — but as quickly as they’re out there, they’re dealt with and he’s moved on. And there’s still plenty of time in an hour to have “totally the awesome-est” lesson ever.

It’s clear, I think, that the shift in primary viola teacher is going to work beautifully. Noah’s a resilient, hard-working kid who takes his music very seriously. I can’t imagine a better teacher for him. And I think the two of them will work through any bumps along the road just fine. I think they’ll probably find a flow and a set of expectations that will work for both of them. In between monthly-ish lessons with T, Noah will still have his grandma available to help him structure and guide his practicing.

Somehow we just have to entice J & T to move to our area. Then everything would be perfect.