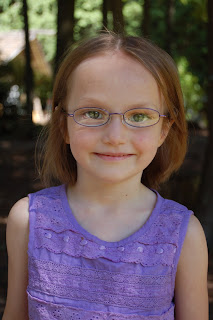 I was getting my prescription on my glasses adjusted and I figured I’d get Noah’s eyes rechecked (he wears glasses for reading if his eyes start to get tired). And while Fiona had never complained of anything, I though it might be a good idea to get her eyes screened. She has been reading language for about two years and music for a good 6 months and does a lovely job with numbers and computers for a five-year-old. So I figured she was unlikely to have any eye problems. She was very excited about her eye appointment. It was going to be an interesting experience, she was sure — even though she was sure she wouldn’t need glasses.

How wrong we all were. You just assume that because you have a precocious kid who doesn’t complain that everything must be okay. But from the instant she sat in the big chair and began trying to read off the chart it was apparent that something serious was up. Her vision was at best 20/100 uncorrected. Twenty-twenty is of course “normal,” and 20/200 is generally equated with legal blindness. So she was basically half-blind. It turns out she’s extremely far-sighted … more than 7 diopters. With correction her vision will likely be close to normal, though she’ll need to be rechecked to confirm that.

This makes sense of a lot of things that in retrospect I’m kicking myself for not putting together. Her tendency to get in front of everyone else in an attempt to see the TV or computer screen. Her inability to cope with the 2nd volume of the “I Can Read Music” book, even though it starts out easier than the first volume, which she can do easily (the second book is in a smaller font). Her ability to read almost any newspaper or magazine headline, but her disinterest in reading anything more than (large-font) easy readers in book form.

I think she looks gorgeous in her new glasses. And she is thrilled with them which is super.